It began as a party, grew into a band, evolved into a sound, and emerged as an institution.

That institution, commonly known as Yo Mama's Big Fat Booty Band (aka the Booty Band), has gone through many changes since their fated onset in 2002. And Tuesday, evening, August 16, they will shake the world, one cheek at a time, as Bud Light Hot Summer Nights returns to the Gerald R. Ford Amphitheater following a two-week hiatus for the Vail International Dance Festival.

According bass player J.P. Miller, there is really only one thing that locals and guests need to remember when they attend Tuesday's free concert.

“Come out wearing comfortable shoes,” Miller advises, “and be ready to dance uncontrollably to the music. People find out what dancing is all about at our show.” 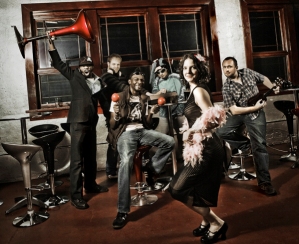 The six-piece band from Ashville, North Carolina is renowned for its signature style, called “bounce music”. Described as “triumphant horns, laid back grooves and heavy backbeats”, Yo Mama's Big Fat Booty Band uses funk as a foundation, while weaving elements of hip-hop, reggae, ska and Latin into the overall mix.

Featuring several multi-instrumentalists, the Booty Band keeps things fresh by constantly changing instrumentation on stage. They focus on original material, but don't be surprised to hear a choice cover of Galactic, Miles Davis, Beastie Boys and others.

Their silly banter and onstage antics keep the crowds laughing as the sounds send feet flying. Yet underneath the seemingly chaotic stage presence is a discipline, a blueprint and a game plan.

“A favorite part of performing”, says Miller, “is when we're on stage and we're looking out at the audience and you see someone that is lost in a moment, screaming and moving; seeing people just completely taken over by the music.”

“When I get into it,” Miller adds, “I can't help jumping around too. You forget where you're at. You let down your inhibitions, so do they, and you have this bond with the audience over that.”