Whether jazz legend Herbie Hancock's latest release, “The Imagine Project”, was a labor of love is open to debate. However, what is certain is that there was a great deal of labor involved.

Hancock, who turned 70 in April, will bring the sounds of “The Imagine Project”, along with a career and a half's worth of hits, to the Vilar Performing Arts Center in Beaver Creek Wednesday evening, August 25, for a special 8 p.m. show. The Beaver Creek performance marks the lone Colorado stop for Hancock on a nationwide tour that features venues that include Carnegie Hall and the Hollywood Bowl, along with festivals such as Montreaux Jazz and Newport Jazz.

"The Imagine Project" was the hardest record I've ever made,” Hancock told Billboard.com., “and not just because of the music. Playing the 10 tracks was easy compared to what it took to put (the album) together."

The album features a wealth of guest performers, including Dave Matthews, Seal, Pink, Jeff Beck, the Chieftains, Toumani Diabete, Wayne Shorter, Chaka Khan and others, as well as recording sessions in several countries such as the U.S., India, England, France, Ireland and Brazil.

"Every song on the record was like putting a while new album together," noted Hancock, who worked on the album with Larry Klein, co-producer of 2007's Grammy Award-winning ‘River/The Joni Letters'. "It's that kind of experience. You had to completely retool for each song. Normally you don't have to do that.” 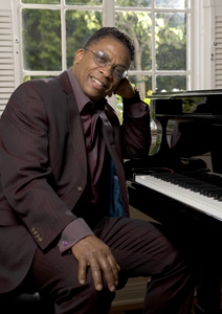 "The Imagine Project" includes a version of John Lennon's "Imagine" with Beck, Pink, Seal and India.Arie, as well as the Beatles' "Tomorrow Never Knows" with Matthews. Khan, Shorter. Anoushka Shankar teamed up with Indian musicians for the Klein original "The Song Goes On", while Diabete, the Chieftains, Lionel Loueke and Lisa Hannigan were part of Bob Dylan's "The Times They Are A' Changin". John Legend and Pink joined forces for Peter Gabriel's "Don't Give Up."

"It's a record that's basically about peace," Hancock added, crediting his attorney with inspiring the concept. "To me, the path towards peace is through global collaboration, so the heart of this record is the idea of making a global record or an international record, in multiple languages and in a variety of places."

The various sessions for "The Imagine Project" were filmed and will become the source material for a documentary and web-based applications, possibly including a site that will allow fans to remix tracks from the album.

Released on June 22, “The Imagine Project” climbed to Number 2 on the Billboard Jazz Charts, currently residing in the Number 8 position.

Tickets for Herbie Hancock and “The Imagine Project” are priced at $98 and $128 and are available online at www.vilarpac.org, by phone at 888.920.ARTS(2787) or in person at the Vilar Center box office in Beaver Creek. Tickets are available online 24 hours a day; the box office is open Monday through Friday from 11am-5pm MST, with additional hours on performance days.

Thanks For sharing this Superb article.I use this Article to show my assignment in college.it is useful For me Great Work. 123movies

I think this is a really good article. You make this information interesting and engaging. You give readers a lot to think about and I appreciate that kind of writing. moonrocks

I think this is a really good article. You make this information interesting and engaging. You give readers a lot to think about and I appreciate that kind of writing. how to sell credit card processing

The material and aggregation is excellent and telltale as comfortably. Home Inspection

This is a wonderful article, Given so much info in it, These type of articles keeps the users interest in the website, and keep on sharing more ... good luck. Home Inspection

Actually I read it yesterday but I had some thoughts about it and today I wanted to read it again because it is very well written. Home Inspection

Your music is amazing. You have some very talented artists. I wish you the best of success. Home Inspection

Your music is amazing. You have some very talented artists. I wish you the best of success. Home Inspection

Going to graduate school was a positive decision for me. I enjoyed the coursework, the presentations, the fellow students, and the professors. And since my company reimbursed 100% of the tuition, the only cost that I had to pay on my own was for books and supplies. Otherwise, I received a free master’s degree. All that I had to invest was my time. Home Inspection

Really nice and interesting post. I was looking for this kind of information and enjoyed reading this one. Home Inspection

I would like to thank you for the efforts you have made in writing this article. I am hoping the same best work from you in the future as well. In fact your creative writing abilities has inspired me to start my own Blog Engine blog now. Really the blogging is spreading its wings rapidly. Your write up is a fine example of it. Home Inspection

The article posted was very informative and useful. You people are doing a great job. Keep going. Residual Payments Reviews

Hi there, I found your blog via Google while searching for such kinda informative post and your post looks very interesting for me Residual Payments Reviews

When your website or blog goes live for the first time, it is exciting. That is until you realize no one but you and your. Residual Payments Reviews

When your website or blog goes live for the first time, it is exciting. That is until you realize no one but you and your. Residual Payments Reviews

Took me time to read all the comments, but I really enjoyed the article. It proved to be Very helpful to me and I am sure to all the commenters here! It’s always nice when you can not only be informed, but also entertained! Residual Payments Reviews

I would like to thank you for the efforts you have made in writing this article. I am hoping the same best work from you in the future as well.. Residual Payments Reviews

This is a fabulous post I seen because of offer it. It is really what I expected to see trust in future you will continue in sharing such a mind boggling post Residual Payments Reviews

You completed a number of nice points there. I did a search on the issue and found nearly all people will have the same opinion with your blog. Residual Payments Reviews

It proved to be Very helpful to me and I am sure to all the commentators here! Residual Payments Reviews

Starting from the idea he started to implement it. That worked remarkably well. bubble shooter

Uncommonly lovely association and mind-boggling creation. Snagit coupon Code I like to see this particular circulate this genuinely is a superb convey thank you for serving them.

I’m excited to uncover this page. I need to to thank you for ones time for this particularly fantastic read!! I definitely really liked every part of it and i also have you saved to fav to look at new information in your site. online business

I truly like you're composing style, incredible data, thankyou for posting. online business

I would recommend my profile is important to me, I invite you to discuss this topic... online business

Very interesting blog. Alot of blogs I see these days don't really provide anything that I'm interested in, but I'm most definately interested in this one. Just thought that I would post and let you know. online business

I am hoping the same best effort from you in the future as well. In fact your creative writing skills has inspired me. online business

It is imperative that we read blog post very carefully. I am already done it and find that this post is really amazing. online business

this is really nice to read..informative post is very good to read..thanks a lot! online business

Nice post! This is a very nice blog that I will definitively come back to more times this year! Thanks for informative post. online business

Through this post, I know that your good knowledge in playing with all the pieces was very helpful. I notify that this is the first place where I find issues I've been searching for. You have a clever yet attractive way of writing. online business

That is very helpful for increasing my knowledge in this field. online business

I need to to thank you for https://gas-stationsnearme.com/shell/
ones time for this particularly fantastic read!! I definitely really liked every part of it and i also have you saved to fav to look at new information in your site.

In fact your creative writing abilities has inspired me to start my own Blog Engine blog now. Really the blogging is spreading its wings rapidly. Your write up is a fine example of it 188bet app

I was taking a gander at some of your posts on this site and I consider this site is truly informational! Keep setting up.. Copy Paste Income Reviews

A great website with interesting and unique material what else would you need. Copy Paste Income Reviews

Thank you so much for ding the impressive job here, everyone will surely like your post. High Ticket Commissions

I really loved reading your blog. It was very well authored and easy to understand. Unlike other blogs I have read which are really not that good.Thanks alot! Is the home cash code a scam?

Its a great pleasure reading your post.Its full of information I am looking for and I love to post a comment that "The content of your post is awesome" Great work. High Ticket Commissions

I’ve read some good stuff here. Definitely worth bookmarking for revisiting. I surprise how much effort you put to create such a great informative website. High Ticket Commissions

I read a article under the same title some time ago, but this articles quality is much, much better. How you do this.. Low Rankings

A debt of gratitude is in order for the blog entry amigo! Keep them coming... Low Rankings

My friend mentioned to me your blog, so I thought I’d read it for myself. Very interesting insights, will be back for more! Low Rankings