She has been called “fiercely independent”, “inspirational” and “the ultimate do-it-yourself songwriter”.

Saturday evening, August 14, folk/rocker Ani DiFranco will bring all that and more when she stops by the Vilar Performing Arts Center in Beaver Creek for an 8 p.m. show. A celebration of her latest release, “Red Letter Year”, along with hits from her extensive song list, the show will also mark one of only three tour dates for DiFranco in Colorado this summer. 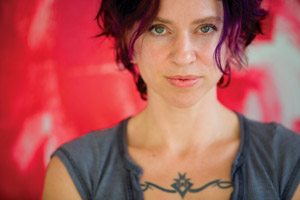 A folkie in punk's clothing, DiFranco battled successfully against the Goliath of corporate rock to emerge as one of the most influential and inspirational cult heroines of the 1990s. A resolute follower of D.I.Y. (Do It Yourself) ethos, DiFranco released her records through her own indie label, Righteous Babe, slowly but steadily building a devout grassroots following on the strength of a relentless tour schedule.

An ardent feminist and an open bisexual, her songs tackled issues like rape, abortion, and sexism with insight and compassion, the music's empowering attitude and anger tempered by the poignant candor of singer/songwriter confessionalism.

Born in Buffalo, New York, she began her career at the age of nine, when her guitar teacher helped her land her first gig, performing a set of Beatles covers at an area coffeehouse.

Befriended by the likes of Suzanne Vega and Michelle Shocked, she later gave up music to study ballet, but at the age of 14 DiFranco returned to the guitar and began composing her first songs. A year later, alienated from her crumbling family structure, she left home, living with friends while making the rounds of the Buffalo folk club circuit.

By the age of 19, DiFranco had written over 100 original songs and after briefly studying art, she relocated to New York City to further her musical aspirations. Besieged by requests from fans for tapes of her performances, she recorded a demo and pressed 500 copies of a self-titled cassette to sell at shows. The tape, a Spartan acoustic folk collection of intensely personal essays on failed relationships and gender inequities, quickly sold out, and in 1990, DiFranco founded Righteous Babe to better distribute her recordings, which were slowly spreading across the country on the strength of a substantial word-of-mouth following.

In 1991, after issuing “Not So Soft”, DiFranco hit the road alone, touring the nation in her Volkswagen and playing gigs wherever she could find them. Her cult blossomed, and her distinct image; shaved head, tattoos, and body piercings, soon became the look for her fans as well.

As albums like 1992's “Imperfectly” and 1993's “Puddle Dive” expanded her musical ambitions as well as her following, DiFranco became the subject of considerable major-label interest, yet she steadfastly rejected all offers as Righteous Babe grew to become a highly viable business venture.

DiFranco continued playing over 200 dates a year, and soon even the mainstream media took notice of her cottage-industry music. Following the release of 1994's masterful “Out of Range”, she exploded with the following year's “Not a Pretty Girl”, which garnered notice from outlets ranging from CNN to The New York Times.

On her new album, “Red Letter Year”, released in 2008, love, family and home are three of the album's most prominent muses, resulting in a dozen songs that exude warmth and renewed vigor.

Now, after two decades of playing over a hundred shows a year, Difranco is packing clubs from the Hard Rock in Vegas to Carnegie Hall in New York. Her Righteous Babe label employs more than a dozen people in her hometown of Buffalo, and supports the recordings of cutting edge artists, while her rhythmic, staccato guitar technique has innovated the way the instrument is played.

The self-described “Little Folksinger” is more than happy to just sit back and make art.

Thanks for an interesting blog. What else may I get that sort of info written in such a perfect approach? I have an undertaking that I am just now operating on, and I have been on the lookout for such info. movie123

This is a great inspiring article.I am pretty much pleased with your good work.You put really very helpful information. Keep it up. Keep blogging. Looking to reading your next post. buy youtube comments

I really like your take on the issue. I now have a clear idea on what this matter is all about.. apkone2.com/

Be careful while buying a chair for back pain. Here we suggest you best ergonomic chair for watching tv. These are highly recommended chairs. Chose a chair and get rid of your back pain.

In the world of www, there are countless blogs. But believe me, this blog has all the perfection that makes it unique in all. I will be back again and again. 쇼미더벳

Thanks for another excellent post. Where else could anybody get that type of info in such an ideal way of writing? In my opinion, my seeking has ended now. HİNDİSTAN VİZESİ REDDEDİLDİ

I have bookmarked your blog, the articles are way better than other similar blogs.. thanks for a great blog! Láminas de de seguridad