Down-valley Thursdays are sounding better and better as Eagle's favorite party in the park returns June 30 with the 2011 edition of the American National Bank ShowDown Town free concert series, presented by the Town of Eagle.

All shows in the five-week series will get unde rway at 6:30 p.m., with the exception of the final performance on July 28, which will kickoff at 6 p.m. in order for people to also have time to take in the Eagle County Fair and Rodeo.

The popular family night out will serve up the perfect segue to the Independence Day festivities on June 30 as the hard-driving banjo and rumble of the doghouse bass of the Blue Canyon Boys work their way into the hearts of bluegrass lovers throughout the park. 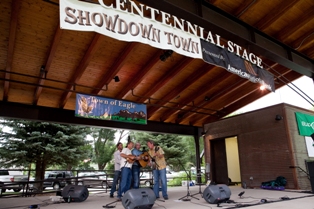 Not to be outdone, the following weeks will include a high energy lineup with something for everyone. On tap for round two on July 7 is the hip-hop, jazz and neo-soul sounds of Salem, while the month's offerings will be rounded out by the rhythm and blues of the Delta Sonics on July 14, folk singer/songwriter Liza on July 21 and the souped-up mix of jump blues, blue-eyed soul and horn-infused rock of Chris Daniels and the Kings for grand finale on July 28.

“The AmericanNationalBankShowDownTown free concert series, presented by the Town of Eagle, is no longer an Eagle-centric event,” explained Ceil Folz, president of the Vail Valley Foundation. “Given the popularity of the concerts, there's a large number of ‘up-valley' people that are spending their summer Thursdays in Eagle for the shows.”

In addition to the free music, the family-friendly AmericanNationalBankShowDownTown, presented by the Town of Eagle, also features a host of activities for the kids each week. Picnics are welcome and several members of Eagle's restaurant community are also on hand to sell food.

So pack up the family, the lawn chairs and the coolers and get yourself to Eagle Town Park for the 2011 edition of American National Bank ShowDown Town, presented by the Town of Eagle. You'll be glad you did.

The AmericanNationalBankShowDownTown free concert series is a project of the Vail Valley Foundation. For additional information on ShowDownTown or the Foundation, visit www.vvf.org.