The most requested artist in the history of the Vilar Performing Arts Center will make his triumphant return to the theatre on Thursday evening, August 5, when legendary Delta bluesman Keb'Mo' brings his unique meld of old and new musical styles to Beaver Creek. 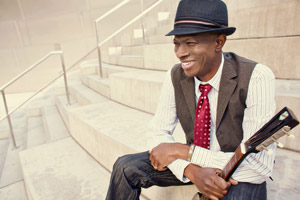 His music is a living link to the seminal Delta blues that traveled up the Mississippi River and across the expanse of America, informing all of its musical roots, before evolving into a universally celebrated art form. For Keb' Mo', the common bond between these influences is the underlying storytelling ethic, the power of song to convey human experience and emotional weight.

The distinctive sound embraces multiple eras and genres, including pop, rock folk and jazz, in which he is well-versed. In total, it owes as much to contemporary music's singer-songwriter movement, including his longtime friends and collaborators Bonnie Raitt and Jackson Browne, as to the spirit of blues godfather Robert Johnson that dwells in his work.

Born Kevin Moore in Compton, California, in 1952, Mo' grew up steeped in the musical traditions that his extended family had brought from the Deep South. He listened to blues recordings and R&B on the local radio station, and heard gospel music every Sunday at the Baptist church his family attended.

By age ten, he was recruited into his school band, where he began on trumpet. But once he discovered the guitar, which his uncle invited him to try, Mo' knew he had found his instrument.

"When I put my hand on the guitar the first time, that was it," he told the Los Angeles Times. "Two weeks later I was playing the guitar, finger-picking and the whole thing. I knew four chords, five chords. I was ready to rock."

Despite his blues heritage, however, Mo' dreamed of success as a pop star. He joined various cover bands after high school, performing Top 40 hits and oldies until one of his bosses suggested that his music lacked a certain something. He was summarily introduced to material with more Caribbean and African sounds, including the music of the Neville Brothers.

It wasn't until 1990, however, that Mo' got the break that would turn his career around. The casting director for Rabbit Foot, a theater production in Los Angeles, needed an actor who could play a Delta blues musician. So successful was his performance that Mo' was cast in another bluesman role in the play Spunk. These roles led to solo engagements that boosted Mo's popularity.

In 1994 he released his debut album, “Keb' Mo'”, which was his new professional name; an African-American version of his given name that he felt would better reflect his blues orientation. The record earned glowing reviews from such publications as the New York Times, People, and the Houston Chronicle, while critics hailed Mo' as an important new voice with both authentic blues roots and a contemporary sound.

Mo' began opening for stars such as Jeff Beck, Carlos Santana, Buddy Guy, Joe Cocker, and George Clinton. In 1996 Mo' released his second album, Just Like You, which won a Grammy Award for Best Contemporary Blues Album--as did his next release, Slow Down, in 1998.

Mo's music could soon be heard everywhere--on radio; on the television series Touched By an Angel and the CBS drama The Promised Land; on several film soundtracks, including One Fine Day, Tin Cup, and Down in the Delta; and on the concert stage, as Mo' shared star billing with such performers as Bonnie Raitt and Celine Dion.

"When I first heard Delta blues," Mo' told Guitar Player Magazine, "it really grabbed me and became my foundation as a player, but it never occurred to me to shut off other things that make me who I am as a musician."

Comfortable with his melding of the old and the new, Mo' has said simply, "I trust my instincts and go with them. It's important to respect the elders and study them, but it's just as important to do your own thing."

Escorts in Karachi are available 24/7 hours by our agency. Call us to book celebrities, TikTok models, actresses, and independent call girls in Karachi https://karachiescorts.agency/

If you feel lonely and want sex with Pakistani call girls model then, do call us to book beautiful Escorts in Karachi for sexual need Call Girls in Pakistan

Are you looking for a night of Independent Escort in Karachi? We are here to provide you with affordable call girls in Karachi escorts 24 hours a day, 7 days a week Escorts in Karachi

Find most beautiful sexy call girls in Karachi. If you are looking forward to hiring independent escorts in Karachi then, book an appointment NOW! KHI Escorts

Islamabad escorts and call girls. Hot and sexy girls for your pleasure. Call now: 03000288848 or visit our website to make an appointment with the hottest escort in Islamabad. Islamabad Escorts

Are you looking for a night of Independent Escort in Karachi? We are here to provide you with affordable call girls in Karachi 24 hours a day, 7 days a week Karachi Escort

Karachi Escorts Club is genuine escort service provider in Karachi. We have collection of VIP escorts in Karachi for in or outcall. 100% satisfaction gurantee Escorts Karachi

Islamabad Call Girls is the best escort agency in Islamabad so don't be shy to contact us: 03081633338 and getting fun with Escorts Girl. Escorts in Islamabad

Are you looking for best and safe escorts in Karachi ? So are you in right place to get VIP Karachi escorts in low rates and your privacy and safty 03090966660 Karachi Escort Services

We provide Call Girls in Pakistan of the highest quality. Our females are the top escorts in Pakistan, and we are Pakistan's most reliable and secure online WEBSITE Prostitutes in Pakistan

Are you looking forward to hiring escorts in Islamabad? then, Angels Of Islamabad agency have collection of hot and sexy call girls in Islamabad. Model in Islamabad

We are top leading Escorts service provider in Islamabad. You can book hot and sexy call girls in Islamabad as per your sexual need. Models Islamabad

Another important consideration is her personality. Is she bubbly and outgoing or more reserved and introverted? Escorts in Lahore There is a wide range of call girls in Lahore that one can hire for various purposes. Some people hire them for companionship, while others might want them for sexual services. Lahore Call Girls Either way, it is important to know how to choose the right call girl so that you can get what you want and avoid any problems.
visit our website:- https://pakistanladies.com/

All of these women have their own unique stories and reasons for being in Islamabad. Escorts in Islamabad They usually find their clients through word-of-mouth or online ads.Independent workers typically charge less than agencies, but they may not always be as reliable or safe. Islamabad Call Girls In return, the agency charges the client a fee for their services. Some of these women also work independently, without an agency.
visit our website:- https://pakistanladies.com/

These escorts are professional companions who will make sure that you have a great time in the city. Escorts in Karachi If you are looking for a city that is full of life, then Karachi is the place for you. The city has a lot to offer in terms of nightlife and entertainment, and one of the best ways to enjoy it is by hiring a Karachi escort. Karachi Call Girls They know all the best places to go and can show you around town. You can also ask them to accompany you to any events or parties that you might be interested in.
visit our website:- https://pakistanladies.com/