The Vail International Dance Festival announced that three artists have been added to the lineup for Dance TV, the Festival's closing performance being held on Saturday, August 13 at the Gerald R. Ford Amphitheater in Vail.

“So You Think You Can Dance” alumnus Allison Holker and “Dancing With the Stars” cast members Anna Trebunskaya and Jonathan Roberts will perform on the final evening of the twenty-three year old Festival. The trio joins Memphis Jookin' sensation Charles “Lil' Buck” Riley and New York City Ballet stars Tiler Peck and Robert Fairchild, already gracing the bill. More casting announcements are expected in the near future. Tickets for Dance TV are on sale now and available online at www.vaildance.org or via phone at 888-920-ARTS(2787). 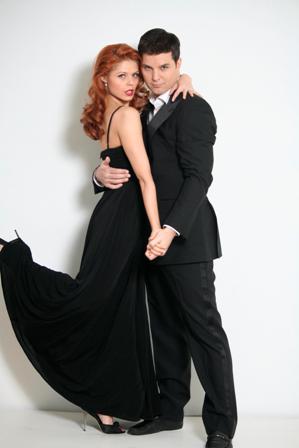 Allison Holker was a season 7 all-star and season 2 competitor on the hit television series "So You Think You Can Dance." She specializes in contemporary, ballet, jazz and tap dancing. Ms. Holker performed in the Disney movies "High School Musical” and "High School Musical 2” as well as "Ballroom with a Twist," a show choreographed by Louie Amstel of "Dancing with the Stars." She recently appeared on the “American Music Awards” with chart-toppers, Train and filmed an episode of “House” with Emmy-winning choreographer Mia Michaels.

Ballroom champions Anna Trebunskaya and Jonathan Roberts return to the Vail stage after gaining national fame on ABC's television series “Dancing With the Stars.” The duo performed at the 2006 Vail International Dance Festival on an evening of Ballroom's Best. Anna is featured in this season's “Dancing With the Stars,” partnered with former boxing champion and legend, Sugar Ray Leonard. The season premiered on Monday, March 21. This is Ms. Trebunskaya's seventh season on DWTS, having danced with football stars Jerry Rice and Kurt Warner, along with funny-man Steve Guttenberg in past seasons. Jonathan Roberts has also appeared in several seasons of DWTS, partnered with Marie Osmond, Heather Mills, Rachel Hunter and Macy Gray, to name a few.

This is the premier performance of Dance TV at the Vail International Dance Festival. The mixed-bill evening celebrates America's obsession with dance shows on television by bringing the small screen action to the stage. Many styles of dance will be showcased including ballet, street dancing, ballroom and contemporary.

Tickets for Dance TV are priced at $20 for lawn seating and $55 or $75 for reserved seating. Tickets are currently available for most Festival performances online at www.vaildance.org or through the Box Office by calling 888.920.ARTS(2787). Tickets for the popularly priced Dance for $20.11 go on sale June 1, 2011. Follow the Festival on Twitter @VailDance and on Facebook at Vail International Dance Festival for schedule updates, additions and features. The Vail International Dance Festival is a project of the Vail Valley Foundation.

Very nice blog and articles. I am realy very happy to visit your blog. Now I am found which I actually want. I check your blog everyday and try to learn something from your blog. Thank you and waiting for your new post. Home Inspection

Well we really like to visit this site, many useful information we can get here. Home Inspection

it was a wonderful chance to visit this kind of site and I am happy to know. thank you so much for giving us a chance to have this opportunity.. Home Inspection

Hey There. I found your blog using msn. This is a very well written article. I’ll be sure to bookmark it and come back to read more of your useful info. Thanks for the post. I’ll definitely return. Home Inspection

The web site is lovingly serviced and saved as much as date. So it should be, thanks for sharing this with us. Home Inspection

It was a very good post indeed. I thoroughly enjoyed reading it in my lunch time. Will surely come and visit this blog more often. Thanks for sharing. Home Inspection

My friend mentioned to me your blog, so I thought I’d read it for myself. Very interesting insights, will be back for more! Home Inspection

I have recently started a blog, the info you provide on this site has helped me greatly. Thanks for all of your time & work Home Inspection