Christian McBride, one of the most prolific, passionate and talented jazz bassists performing today, brings his acoustic quintet Inside Straight to the Vilar Performing Arts Center (VPAC) on Wednesday, March 23 at 7:30 p.m.

Christian McBride is one of the most omnipresent figures in the jazz world, in the past 20 years, which is sometimes hard to believe considering that the man is not yet 40 years old.

Inside Straight is comprised of McBride's old friends, pianist Eric Reed, alto saxophonist Steve Wilson and drummer Carl Allen, as well as newcomer vibraphonist Warren Wolf, one of McBride's former students. The group made its debut at the Village Vanguard in New York in 2007. 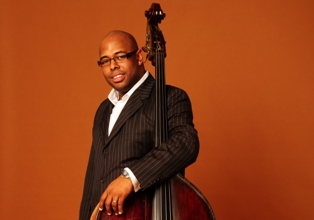 In 2009, Christian McBride and Inside Straight released “Kind of Brown,” a masterwork of upbeat, straight ahead jazz with a strong bebop feel and swing, a tribute to Ray Brown and the very significant musical legacy that is in danger of being forgotten.

McBride's love of jazz music originated when he was playing the electric bass at the age of eight, but over the years he became more interested in playing the acoustic bass. He studied at Juilliard (starting in 1989) and then toured and recorded with many of the greatest artists in the business, including: Herbie Hancock, Chick Corea, Diana Krall and Sting.

Dedicated to jazz education and exposing the art form to new and different audiences, McBride has served as an artist in residence at Detroit's International Jazz Festival and the Monterey Jazz Festival as well as artistic director at various arts centers and museums (including co-director of the National Jazz Museum in Harlem, creative jazz chair for the Los Angeles Philharmonic and artistic director of the JAS Band Academy (Jazz Aspen Snowmass, Band Edition.)

Tickets for Christian McBride & Inside Straight are $40. Choose seats online at vilarpac.org, by phone at 888.920.ARTS(2787) or in person at the Vilar Center box office in Beaver Creek or Marketplace Box Office in Vail Village.

What: Christian McBride & Inside