“Colorado skiers and snowboarders can get a jump on the 2011-2012 ski season at Ski Cooper for a significantly discounted price,” stated Bob Casey, Ski Cooper's Marketing Manager. “We are always excited to offer affordable lift tickets to everyone in Colorado each season, and this deal is unbeatable.” 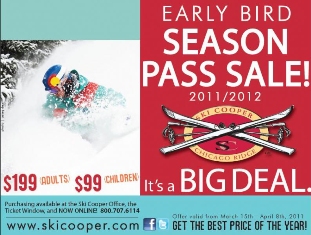 Season passes can be purchased online at www.skicooper.com no later than April 8, 2011. Snow riders may also purchase next year's season pass at the Ski Cooper ticket window through closing day on April 3, or by printing the order form on the website and mailing it in before April 18. Please see website for conditions governing season pass use.

With its base at an altitude of 10,500 feet, a summit at 11,700 feet, Ski Cooper is Colorado's fifth oldest ski resort. It offers 2,400 skiable acres of world-class, affordable skiing, snowboard, tele-skiing and snow cat tours in heart of Colorado's Rocky Mountains. Its rich history embraces Leadville's silver boom, the 10th Mountain Division's training for World War II, and more. Lifts open at 9:00 a.m. and close at 4:00 p.m., and the rental shop is open 8:30 a.m. – 4:30 p.m.

Ski Cooper – where there is something for everyone and Less IS more. For more information, call (719) 486-3684 or visit www.skicooper.com.

Intersting post and site. Good that Google listed so i was able to get here. This site will go no in my bookmarks from now. dg casino ทดลองเล่น

Thanks for writing such a good article. Keep it up! irishcasinomaxi

Thank you for your post, I look for such article along time, today i find it finally. this post give me lots of advise it is very useful for me. Home Inspection

Its as if you had a great grasp on the subject matter, but you forgot to include your readers. Perhaps you should think about this from more than one angle. Home Inspection

We are tied directly into the sate’s renewal database which allows us to process your request almost instantly. Home Inspection

Regular visits listed here are the easiest method to appreciate your energy, which is why why I am going to the website everyday, searching for new, interesting info. Many, thank you! Home Inspection

Thanks for the informative and helpful post, obviously in your blog everything is good.. Home Inspection

I really enjoyed reading this post, big fan. Keep up the good work andplease tell me when can you publish more articles or where can I read more on the subject? Home Inspection

This is also a very good post which I really enjoy reading. It is not everyday that I have the possibility to see something like this. Home Inspection

I've been looking for info on this topic for a while. I'm happy this one is so great. Keep up the excellent work Home Inspection

Great post I would like to thank you for the efforts you have made in writing this interesting and knowledgeable article. Home Inspection

I have to search sites with relevant information on given topic and provide them to teacher our opinion and the article. Money Metals Exchange Reviews

I have to search sites with relevant information on given topic and provide them to teacher our opinion and the article. Money Metals Exchange Reviews

It's late finding this act. At least, it's a thing to be familiar with that there are such events exist. I agree with your Blog and I will be back to inspect it more in the future so please keep up your act. Money Metals Exchange Reviews

I am always searching online for articles that can help me. There is obviously a lot to know about this. I think you made some good points in Features also. Keep working, great job Money Metals Exchange Reviews

Really impressive post. I read it whole and going to share it with my social circules. I enjoyed your article and planning to rewrite it on my own blog. Money Metals Exchange Reviews

There's no doubt i would fully rate it after i read what is the idea about this article. You did a nice job.. Money Metals Exchange Reviews

I am overwhelmed by your post with such a nice topic. Usually I visit your blogs and get updated through the information you include but today’s blog would be the most appreciable. Well done! Money Metals Exchange Reviews

Wonderful blog post. This is absolute magic from you! I have never seen a more wonderful post than this one. You've really made my day today with this. I hope you keep this up! Money Metals Exchange Reviews

You completely match our expectation and the variety of our information. Money Metals Exchange Reviews