“Juggling everything from umbrellas to soccer balls—and with props as varied as ladders and giant spinning wheels—the performers show just why they're world-famous,” said the New York Post. 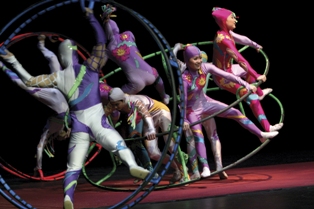 Now marking over 30 years of continuous touring, the members of the Chinese Golden Dragon Acrobats are actors, athletes and artists, with an unmistakable passion for their art. With performers trained since early youth, their feats of physical daring and grace continue to enthrall audiences of all ages.

The ancient art of Chinese acrobatics is an old and long running tradition that began in China well over two thousand years ago. Over its long and rich history it has developed as one of the most popular art forms among the Chinese people.

While many historical records provide evidence for the development of Chinese acrobatics as far back as the Xia Dynasty, it is most commonly held that the art form did not become wildly popular until approximately 2,500 years ago when it began to capture the attention of the country's powerful emperors.

Contemporary acrobat troupes have served the role of becoming a part of the culture exchange between China and other western nations. Acrobatic art best portrays the hard working, endurance and courage emphasized among the Chinese culture.

Tickets for Chinese Golden Dragon Acrobats are $42 for adults and $32 for children. Choose seats online at vilarpac.org, by phone at 888.920.ARTS(2787) or in person at the Vilar Center box office in Beaver Creek or Marketplace Box Office in Vail Village.

The VPAC will offer hummer shuttle service from the Marketplace Box Office in Vail Village to the VPAC in Beaver Creek for both of the Chinese Golden Dragon Acrobats' performances on March 5. The cost is $10 per person (round-trip) or $40 for a family of 4 or more (round-trip.) For more information, please call 888.920.ARTS(2787).

Therefore, together with the buyer, the sourcing agent should work to enhance the relationship with the suppliers, instead of always exerting pressure on them. China sourcing agent

is a fun game to play in your free time after a long day at work; if you'd like, join me slope io