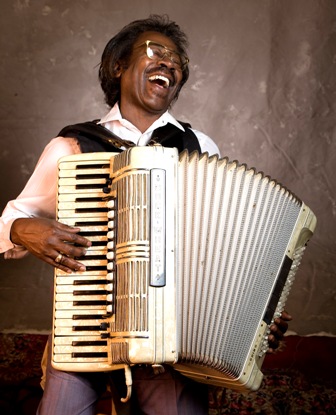 Louisiana's Buckwheat Zydeco will take the stage for a free concert in Vail Village on Friday, March 11 at 6 p.m. to close out the CarniVail celebrati

Vail gets hit with a spicy taste of New-Orleans-style fun when CarniVail returns to town March 6-11. Guests will enjoy a week's worth of Mardi Gras merriment and all the Cajun fixin's from a crawfish boil to the Fat Tuesday Parade, complete with plenty of beads.

CarniVail kicks off Sunday, March 6 on Vail Mountain with the World's Highest Low-Country Crawfish Boil at Eagle's Nest from noon to 2:30 p.m. The annual Crawfish Boil will feature Cajun and Creole cuisine like crawfish etouffee, gumbo, king cake and specialty drinks from Grand Marnier. The celebration is also set to include live music from Jonny Mogambo, plenty of complimentary Mardi Gras beads and expos from event sponsors like Muscle Milk, Maui Jim and Rockstar.

“The Crawfish Boil at Eagle's Nest is our traditional kick-off to Mardi Gras and the CarniVail celebration,” said Adam Sutner, director of sales and marketing for Vail Mountain. “The event provides our guests with the opportunity to get into the CarniVail spirit by enjoying a wide variety of Cajun and Creole fare in an atmosphere where it wouldn't typically be found – above 10,000 feet.”

The CarniVail celebration continues at on Tuesday, March 8 in Vail Village with the legendary Fat Tuesday Parade and Bud Light Street Party. The Fat Tuesday Parade, traveling from East Meadow Drive near Vail Road to Seibert Circle in Vail Village, will get going promptly at 4 p.m. and will conclude with the official crowning of the CarniVail King and Queen and the announcement of the float competition winners. New Orleans-influenced jam-band Frogs Gone Fishin' will perform at Checkpoint Charlie following the parade.

Registration is now open for parade floats, and those interested in participating can get the registration form at vail.com/carnivail or by contacting Kelly Paton at Highline Sports & Entertainment at 970-476-6797 x111. There is no cost to participate in the Fat Tuesday Parade. Prizes will be given to the top three floats at the 2011 Fat Tuesday Parade, with the first place float taking home $1,000 in cash and the second and third place floats taking home non-cash prizes like a gift card from Blue Moose Pizza.

To close out the week of CarniVail festivities, Mardi Gras favorites Buckwheat Zydeco will perform a free, outdoor concert presented by Grand Marnier at Solaris in Vail Village on Friday, March 11. Hailing from Lafayette, La. and led by musical legend Stanley “Buckwheat” Dural Jr., Buckwheat Zydeco is the preeminent ambassador of Louisiana zydeco music. The New York Times has said they are one of the best bands in America, and their show is sure to have guests of all ages boogieing to the Buckwheat beat. The gates for this Creole dance party open at 6 p.m.

For more information on CarniVail, including a complete schedule of events, visit vail.com/carnivail.

CarniVail is yours thanks to Vail Mountain, Bud Light, SoBe Lifewater, Grand Marnier, Town of Vail, Maui Jim and SKI Magazine and is sponsored in part by the Ray Festa Melanoma Foundation, Vail Daily, TV8 and KZYR-The Zephyr.

I’ve been exploring for a little for any high quality articles or blog posts on this kind of area . Exploring in Yahoo I at last stumbled upon this website. Reading this info So i’m happy to convey that I’ve a very good uncanny feeling I discovered just what I needed. I most certainly will make sure to don’t forget this website and give it a look regularly. kopar at newton

Hello my family member! I wish to say that this post is amazing, great written and come with approximately all vital infos. I would like to see extra posts like this . https://wittycreators.in/

By And Large I do not post on blogs, but I should to say that this post really forced me to do so. Genuinely nice article! source

Hello there, just became alert to your blog through Google, and found that it is really informative. I am going to watch out for brussels. I will appreciate if you continue this in future. Lots of people will be benefited from your writing. Cheers! Pierre Anti Stress

After examine a couple of of the weblog posts on your web site now, and I really like your manner of blogging. I bookmarked it to my bookmark website record and will probably be checking back soon. Pls take a look at my web page as well and let me know what you think. fianceevisasecrets.com/promotional-bags-which-keep-things-cool-are-much-appreciated-promotional-gifts

Youre so awesome, man! I cant believe I missed this blog for so long. Its just great stuff all round. Your design, man…too amazing! I cant wait to read what youve got next. I love everything that youre saying and want more, more, MORE! Keep this up, man! Its just too good. 온라인카지노주소

I’ve recently started a blog, the information you offer on this website has helped me greatly. Thank you for all of your time & work. https://www.online-relx.com/news/5

ویزای توریستی ترکیه hello!,I like your writing so much! proportion we keep in touch more approximately your article on AOL? I need an expert in this house to solve my problem. May be that is you! Having a look forward to peer you.

casino en ligne fiable I just extra this particular give food to to my book marks. I must say, I truly take pleasure in reading the weblogs. Continue the good work!

犀利士 I’d need to check with you here. Which isn’t some thing I usually do! I love to reading a post that may get people to believe. Also, many thanks permitting me to comment!

buy genf20 plus This site is really a walk-through it really is the details you wanted concerning this and didn’t know who to inquire about. Glimpse here, and you’ll absolutely discover it.

sell my house charleston An interesting discussion will probably be worth comment. I think that you can write more about this topic, it might not certainly be a taboo subject but usually individuals are inadequate to speak on such topics. To a higher. Cheers

Masturbateur I wish to show thanks to you just for rescuing me from this type of incident. Because of scouting throughout the world wide web and seeing concepts which were not powerful, I assumed my life was done. Being alive without the presence of approaches to the issues you’ve sorted out by means of this report is a serious case, and the ones which may have adversely affected my career if I hadn’t come across your blog. Your personal skills and kindness in maneuvering the whole thing was important. I don’t know what I would have done if I had not come across such a thing like this. I can also now relish my future. Thanks so much for your specialized and results-oriented guide. I won’t hesitate to refer your web page to any person who would need support about this subject matter.

https://www.nervous.fr Wonderful blog! I found it while browsing on Yahoo News. Do you have any suggestions on how to get listed in Yahoo News? I’ve been trying for a while but I never seem to get there! Cheers

tourist visa for india Despite the fact that I would’ve liked it much more if you inserted a related video or at least pictures to back up the details, I still believed that your update was somewhat useful. It’s regularly difficult to make a complex issue look rather straightforward. I enjoy this webpage & shall subscribe to your rss feed so shall not miss anything. Quality information.

Transport maszyn hi!,I like your writing so much! share we keep up a correspondence extra approximately your post on AOL? I require a specialist on this space to solve my problem. May be that is you! Looking ahead to peer you.

비아그라 구입 Hey i think your blog is good! I found it on google i think i will come back one day. Thanks [Reply]

Canada Visa for German Citizens when using hair dryers, it would be better to use those low wattage types because they are not very damaging to the hair’

Glock36 Wow, you seem to be very knowledgable about this kind of topics.’.-.:

รับทำ seo รายเดือน Good write-up, I¡¦m normal visitor of one¡¦s blog, maintain up the nice operate, and It is going to be a regular visitor for a long time.

บริการรับทำ seo ราคาถูก Hey there, Can I copy this post image and implement it on my personal web log?

ВЪЕЗДНАЯ ВИЗА ИНДИИ I discovered your blog site internet site on the search engines and appearance some of your early posts. Always maintain within the excellent operate. I recently additional increase your Feed to my MSN News Reader. Seeking forward to reading much more on your part down the road!…

New Zealand turistvisum you might have a great blog right here! would you wish to make some invite posts on my blog?

kitchen aids have a variety of different appliances that can help you cook your food easier. https://strongtoto.com/safe

The the next occasion Someone said a blog, I really hope who’s doesnt disappoint me about this blog. After all, I know it was my choice to read, but I just thought youd have some thing intriguing to talk about. All I hear is really a number of whining about something you could fix in case you werent too busy seeking attention. Packers and Movers Noida to Delhi

Youre so cool! I dont suppose Ive read such as this before. So nice to find somebody with some authentic ideas on this subject. realy i appreciate you for starting this up. this web site are some things that’s needed online, somebody if we do bit originality. helpful project for bringing new stuff on the web! https://sevenichgems.com/category/pendants/brass-pendants/