The Vail Valley Foundation announced Thursday that tickets for the 2011 Vail International Dance Festival will go on sale Monday, Feb. 21 at 11 a.m. (MST). Performances will take place July 31 through Aug. 13 at the Gerald R. Ford Amphitheater in Vail and Vilar Performing Arts Center in Beaver Creek, while community events will be held in streets and villages throughout the Vail Valley.

Under the leadership of Artistic Director and former New York City Ballet Principal Dancer Damian Woetzel, the 2011 Vail International Dance Festival will host a total of 17 performances. Tickets are priced from $11 to $90 and available online at www.vaildance.org or via phone at 888-920-ARTS(2787). 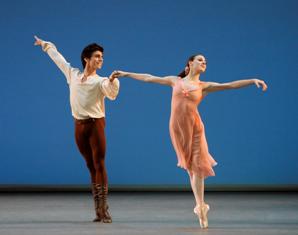 The 2011 Festival will feature the worldwide debut of New York City Ballet's new touring company Moves, led by City Ballet's Ballet Master-in-Chief Peter Martins. NYCB Moves will open the Festival with three completely different programs, with performances taking place on Sunday, July 31, Monday, Aug. 1 and Tuesday, Aug. 2. A special “Big Apple” package will be available through March 7 with 20 percent off the total price when tickets are purchased for all three NYCB Moves performances.

The 2011 Festival will also feature the Vail debut of the acclaimed Mark Morris Dance Group performing signature works by the choreographer The New York Times has proclaimed “arguably the most successful and influential choreographer alive.”

Following closely on the heels of the Morris company, the Festival's first week will continue with two different International Evenings of Dance featuring superstars of ballet and modern dance from around the world, followed by a Ballroom Spectacular with champions and stars from the ballroom world in a show made especially for Vail.

New work has been a mainstay of Festival programming, and the tradition continues on August 8 with an evening of world premieres choreographed by Christopher Wheeldon in his return to Vail, as well as Trey McIntyre, Richard Siegal, Emery LeCrone and 2011 Festival Artist-in-Residence Charles “Lil' Buck” Riley.

On August 12, McIntyre's company, the Trey McIntyre Project (TMP), will take the stage in a full program featuring his inventive contemporary choreography including his hit Ma Maison set to New Orleans jazz. TMP will be happily familiar to Vail audiences as the company launched in Vail in the summer 2005, and in 2006 TMP gave a full performance in collaboration with the eminent soprano Jessye Norman.

The 2011 Festival closes on Saturday August 13 with a program titled Dance TV, celebrating the popularity and success of dance on the small screen. The show features special guests and competitors from the world of television, in what is sure to be a rousing conclusion to the Festival. Performing on this program, in addition to several others, is Festival Artist-in-Residence Charles “Lil' Buck” Riley, the Memphis jookin' sensation. Jookin' is a form of street dancing, and Lil' Buck has been bringing it mainstream, appearing on various television shows and commercials, and choreographing and dancing for music videos including the Grammy-nominated Janelle Monáe's “Tightrope,” which he performed with her on both “Dancing with the Stars” and “So You Think You Can Dance.”

UpClose: The Male Dancer by Balanchine

International Evenings of Dance I