With nods to American soul legends such as Sam Cooke and Ray Charles, Hunter's music maintains a sense of nostalgia, while infusing his sound with modern style and distinctive technique.

“The history [of rhythm & blues] is so rich with great singers and performers. I'm just trying to tap into that vein and try to make music that is about love and romance and heartbreak—all those great things that will fuel songs long after we‘re here,” said Hunter. 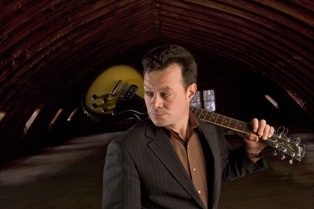 Hunter's stage show won him an influential fan early in his career. Van Morrison took a liking to the crooner after seeing one of his shows in Wales. He then appeared on Hunter's debut album in 1991. Hunter has toured several times with Morrison and is featured on Morrison's live album “A Night in San Francisco,” as well as the studio recording “Days Like This.”

Hunter's Grammy-nominated “People Gonna Talk” introduced him and his band to a worldwide audience in 2006. The album reached #1 on Billboard's Blues chart and took Hunter from "one of the best voices, and best kept secrets, in British R&B and Soul," as Van Morrison put it, to a major breakout success.

Born into a working-class family in Essex, England in 1962, Hunter's earliest musical influences were a collection of 78 r.p.m. discs of ‘50s rock ‘n' roll and rhythm & blues given to him by his grandmother and his older brother Perry.

“It wasn‘t quite like growing up with the blues in Alabama, but in my part of England, anywhere south of Watford would be considered Alabama,” Hunter said. “In the States, you‘ve got the Mason-Dixon Line and in England, we‘ve got the Watford Gap.” Hunter's passion for the music of the ‘50s and ‘60s has never waned.

Tickets for James Hunter are $37 and are available online at vilarpac.org, by phone at 888.920.ARTS(2787) or in person at the Vilar Center box office in Beaver Creek.

Good – I should certainly pronounce, impressed with your website. I had no trouble navigating through all tabs as well as related information ended up being truly simple to do to access. I recently found what I hoped for before you know it at all. Quite unusual. Is likely to appreciate it for those who add forums or anything, web site theme . a tones way for your client to communicate. Nice task. https://sportsnewslive.org/안전공원

You made some decent points there. I looked online for that problem and found most people goes coupled with with all your website. Merchant ISO Program

I suppose that some will say the movie was a success because it was action packed, exciting and appealed to a non-trekkie younger audience. Заявление за виза за Канада

I’d must check with you here. Which is not something I usually do! I take pleasure in reading a put up that can make people think. Additionally, thanks for allowing me to comment! ufabet เข้าสู่ระบบ

I like the precious information you offer for your articles. I will be able to bookmark your blog and feature my youngsters take a look at up here generally. I am relatively certain they’ll learn lots of new stuff here than anyone else! ไฮโลออนไลน์

I really love the way you discuss this kind of topic..”\"*. polskie kasyno online

hello!,I like your writing very much! share we communicate more about your post on AOL? I require a specialist on this area to solve my problem. May be that’s you! Looking forward to see you. 加拿大簽證在線申請

very nice put up, i certainly love this website, carry on it 캐나다 비자 온라인

I love this blog, which is why I keep coming back. Fes Things To Do

Thanks for your entire labor on this web page. Kate really loves managing investigation and it’s really easy to see why. We hear all regarding the lively tactic you deliver informative ideas through the blog and therefore improve response from website visitors on the concern and our simple princess is really starting to learn a great deal. Take advantage of the rest of the new year. You have been conducting a fantastic job. kingmaker game

You got a very wonderful website, Gladiola I noticed it through yahoo. เว็บหวย

This design is incredible! You obviously know how to keep a reader amused. Between your wit and your videos, I was almost moved to start my own blog (well, almostHaHa!) Great job. I really loved what you had to say, and more than that, how you presented it. Too cool! INDIAN VISA FOR US CITIZENS

Super diary! I actually enjoy how it is easygoing on my eyes and also the information are good scripted. I am questioning how I might be notified whenever a newborn post has been successful. I have signed to your rss feed which must make the trick! By! https://sites.google.com/view/buy-twitch-followers/buy-twitch-viewers

You lost me, buddy. I mean, I assume I get what youre declaring. I have an understanding of what you’re saying, but you just seem to have forgotten about that you’ll find some other individuals within the world who view this matter for what it actually is and may perhaps not agree with you. You may be turning away many of men and women who may have been supporters of your blog site. Kennected

These kind of electronic mails tend to be these scams! Typically the RATES fails to deliver everyone email addresses, together with surely does not notify that you the fact that you can be scheduled an important refund. ויזת כניסה לניו זילנד אונליין

I just now wanted to tell you how much we appreciate every thing you’ve discussed to help enhance the lives of men and women in this subject matter. Through your own articles, we have gone from just a novice to a professional in the area. It’s truly a honor to your work. Thanks idn poker

I appreciate your wordpress design, wherever did you obtain it from? VISA DE TURÍSTICO DE NOVA ZELANDA

Aw, this has been an exceptionally good post. In concept I would like to place in writing similar to this moreover – spending time and actual effort to have a really good article… but what can I say… I procrastinate alot and by no means seem to get something completed. ไพ่สามกอง ออนไลน์

Greetings, have you ever before wondered to write regarding Nintendo Dsi handheld? VIZA ZA NOVI ZELAND ONLINE

Hey very cool web site!! Man .. Excellent .. Amazing .. I will bookmark your web site and take the feeds also…I’m happy to find a lot of useful info here in the post, we need develop more strategies in this regard, thanks for sharing. . . . . . https://strongtoto.com/승무패

What a nice post! I'm so happy to read this. 온라인카지노사이트 What you wrote was very helpful to me. Thank you. Actually, I run a site similar to you. If you have time, could you visit my site? Please leave your comments after reading what I wrote. If you do so, I will actively reflect your opinion. I think it will be a great help to run my site. Have a good day.

I just wanted to type a quick comment to thank you for some of the splendid items you are showing on this site. My extended internet search has finally been recognized with extremely good facts to go over with my visitors. I ‘d assert that many of us visitors are truly endowed to be in a fine network with many marvellous people with interesting hints. I feel rather privileged to have seen your entire website page and look forward to so many more pleasurable moments reading here. Thanks a lot again for a lot of things. skincell advanced