Amanda Walther and Sheila Carabine of Dala (the duo's name was formed by combining the two last letters of each artist's name) have come a long way in a short time. The two best friends, who met in their high school music class and wrote their first song together in 2002, have since performed mostly in Canada, but began appearing in the U.S. for the first time in 2010. 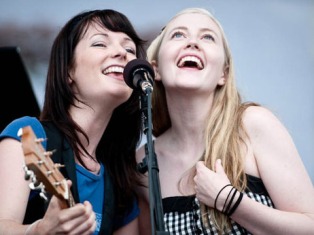 The VPAC in Beaver Creek welcomes Dala on Saturday, October 23 at 7:30 p.m.

Dala have quickly established themselves as “one of the biggest rising stars on the pop-folk circuit”. Their music is inspired by artists like Joni Mitchell, Neil Young, Bob Dylan and Gordon Lightfoot and the duo's live performances showcase their extraordinary ability to interweave their voices from lead to harmony and back again while accompanying themselves on acoustic guitar and piano.

Dala's VPAC show is a part of the their nationwide fall tour, in support of their acclaimed PBS special “Girls From the North Country,” a program that pays homage to the melody, lyricism and spirit of the great folk artists of all time. The PBS special has aired over 400 times on stations across the country since June.

Saturday night's Dala show also marks the first-ever “VPAC Cares about Education Night” and will feature a school supply drive for Eagle Valley High School. Bring a calculator, white out, sharpie or other supply from the VPAC's school supply wish list and receive one free beer at the Dala show.

Beaver Creek's Dusty Boot restaurant is again offering their “Date Night” special, a three-course dinner for two plus two tickets to the Dala concert for $50 or $25 for concertgoers that have previously purchased the Underground Access Pass.

This post post made me think. I will write something about this on my blog. m river boat tours krakow

I do not even know how I ended up here, but I thought this post was great. I do not know who you are but certainly you’re going to a famous blogger if you are not already Cheers! professional search engine optimization company

Simply desire to say your article is as astonishing. The clarity in your post is just great and i can assume you are an expert on this subject. Fine with your permission allow me to grab your RSS feed to keep up to date with forthcoming post. Thanks a million and please keep up the gratifying work. buy quality backlinks cheap

I am usually to running a blog and i actually recognize your content. The article has really peaks my interest. I am going to bookmark your website and keep checking for new information. Buy Cocaine In Europe