The 2010-2011 winter season at the Vilar Performing Arts Center (VPAC) will be announced shortly, but the STARS (Support The Arts Reaching Students) Series, geared toward Eagle County school children, is already underway.

Through the STARS series, the VPAC provides free transportation and tickets to more than 4,000 Eagle County students to expose them to the thrill of live performing arts. The 2010-2011 STARS Series is underwritten by Pat and Peter Frechette and sponsored by Vail Resorts ECHO. 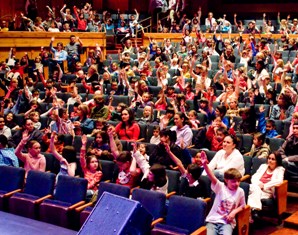 The VPAC's STARS program was started eight years ago and is offered to promote artistic, educational and cultural enrichment to local students through in-school workshops and daytime shows at the theatre.

The next STARS performance on Tuesday, October 19 will feature Ken Waldman, “Alaska's Fiddling Poet.” Waldman has drawn on his 23 years in Alaska to produce poems, stories and fiddle tunes that combine into a performance uniquely his own.