The competition challenged 13 teams, captained by select Colorado business and civic leaders, to ski as many vertical feet as possible during the season for the right to direct $250,000 of Vail Resorts charitable giving to the team’s selected charity. The winning charities and teams include:

• 1st Place $150,000 donation to Children’s Hospital of Colorado. Team Finlon led by philanthropist CatheyFinlon skied on behalf of the organization. 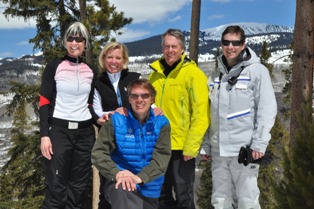 Winners were announced during a special event on Vail Mountain this afternoon. Teams skied their final vertical feet in the morning before racing against one another as part of the EpicMix Racing program. Additional $1,000 donations were made for the top three winning EpicMix Racing teams and their selected charity.

The Vail Ski Challenge was designed to raise resources and awareness for important community charities and create greater connections among Colorado civic and business leaders – all while enjoying Colorado’s iconic mountains and skiing.

Each business leader assembled a team of six who racked up vertical feet for charity throughout the ski season at any of Vail Resorts’ mountains. The top four teams, as determined by the team vertical foot score, were able to direct a total of $250,000 of Vail Resorts charitable giving to the charity designated by that team.

The additional teams and charities represented in the 2013 Vail Ski Challenge included:

The Vail Ski Challenge is just one of the many charitable giving programs that are part of the Vail Resorts Echo program, which is aimed at both protecting the iconic settings that surround the resorts and helping build stronger communities where the Company’s employees live and work. Vail Resorts Echo encompasses three core efforts – environmental stewardship, charitable giving and community volunteer engagement. Each year, Vail Resorts Echo partners with more than 180 local non-profits, contributing more than $6 million to support programs that create strong families, give local kids educational opportunities and preserve our forests.

I am Harry Winks from the United Kingdom also passionate rider and have two bikes in good condition currently I am not able to ride any of them due to busy in providing https://payforessay.net/services to students with the other team members who are also professional in writers.