The lineup of live entertainment and events at Vail Snow Daze, the annual festival to celebrate the start of winter, ramps up on Thursday, Dec. 13 with a live concert from The Shins with special guest Divine Fits in Ford Park.

Grammy-nominated indie rockers The Shins take the stage Thursday night in Ford Park to kick off the Vail Snow Daze concert lineup. Well known for their songs “New Slang” and their current hit single “Simple Song,” The Shins have a melodic sound that is a guaranteed crowd pleaser.

Opening for The Shins is rock powerhouse Divine Fits. The band, made up of Spoon's Britt Daniel, Wolf Parade's Dan Boeckner, Sam Brown of New Bomb Turks and Alex Fischel of Papa, has been together as a band for less than a year. Though young, Divine Fits has received critical acclaim that pays homage to the band’s top-notch rock pedigree. 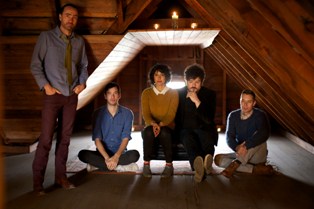 General Admission tickets for all Vail Snow Daze concerts are on sale ranging from $39.50 to $49.50. General Admission Three-Concert Passes, which give holders access to the general admission area at all three shows, are on sale for just $129.50. Single concert Private Reserve Passes for The Shins on Thursday are available for $135. A very limited number of single-concert Private Reserve passes for Michael Franti & Spearhead on Friday and Wilco on Saturday have been released and are now available for $150. Only a few Private Reserve Three-Concert Passes remain, which are on sale for $349. Private Reserve passes give holders access to preferred viewing of the stage in Ford Park, complimentary food and complimentary alcoholic and non-alcoholic beverages. Prices do not include applicable service fees.

Tickets for Vail Snow Daze concerts can be purchased at the following locations:

At the Ford Park concert venue beginning at 5 p.m. Thursday, Friday and Saturday. Note that no parking is available at Ford Park due to the Vail Snow Daze concerts

My friend first found your blog on Google and she referred your blog to me.,”..’ travel magazine

Rscit Important Question
Join only one group, as the same data will be forwarded to all groups.

link7day.com
This service will add details of your website in the category category of the website that we have clearly categorized category.

party space for rent in las vegas
The Lotus House Events is set on over 1.5 acres of meticulously cultivated grounds, this stunning estate features expansive indoor and outdoor spaces.

las vegas plumbing
We started Kingdom Plumbing with the goal of offering the Las Vegas area an honest, ethical, and affordable option.

Ironlist is one of the fastest growing online aggregator of sales and auction platform for used Heavy equipment and Machinery for sectors like construction, transportation, agriculture, energy, oil and gas, mining, and forestry worldwide. used john deere tractors for sale

https://www.live22lucky.com
Web slots are easy to break. What to choose from Today we have a compliment for everyone for sure.

This is a great inspiring article.I am pretty much pleased with your good work.You put really very helpful information. Keep it up. Keep blogging. Looking to reading your next post.
dogecoin millionaire

I have read your article, it is very informative and helpful for me.I admire the valuable information you offer in your articles. Thanks for posting it.. 犀利士藥局

สล็อต ฝากถอน ไม่มีขั้นต่ำ
There are a variety of games for players to choose from.

My partner and i appeared to be aware of this particular currently, however there seemed to be several useful bits which finished the picture to me, thanks a lot! hypochlorous acid products

SEO สายเทา
We have a dedicated team of Digital Marketing SEO experts and they work professionally.

slotxo เล่น
slotxo. Play until bored. What should I do? Today Hubslotxo will introduce more green plants in the room.

Roman Rodyakin
is an engineering manager who has previously worked for multiple international tech companies.

A lot of people were enthusiastic sportsmen or enjoyed music and dancing. Chances are you’ll recall that you were most joyful on the functioning track. Nonetheless, with increasing obligations maybe you have found almost no time to indulge in any of your interests. Do you suffer from depression and would like to get out of its abysmal depths without lifelong antidepresants? You could try and feel free to overcome depression the natural way. hypochlorous acid machine