Three riders from China will be part of the USA Pro Challenge for the first time as Asia's first pro continental squad – the Champion System Pro Cycling Team – makes its debut in the week-long race that starts Monday in Durango and comes to the Vail Valley on Thursday.

Chinese riders Pengda Jiao, Biao Liu and Gang Xu will be joined by Americans Chris Butler and Craig Lewis, Australians Will Clarke and Cameron Wurf and Matthias Friedemann of Germany. Lewis, who lives in Boulder, Colo., and Butler both participated in last year's inaugural edition of the race.

"I'd really like to get a stage win," Lewis said. "I don't think I'll be fighting for the overall, so to be on the attack on a few key stages will be the goal. I'm not sure which stages yet, as we will have to see how the race is unfolding the first couple of days."

On the longest stage of the race in last week's Larry H. Miller Tour of Utah, Lewis was part of a small group that built a lead of nearly 11 minutes and enjoyed more than 200 kilometers of freedom before being caught within sight of the finish line. While disappointed at that result, Lewis said it helped him build fitness for Colorado. 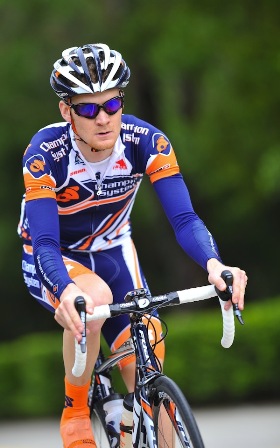 "I suffered through the heat the first few days, but I came around nicely towards the end," Lewis said. "Being out there and showing off the Champion System jersey in that breakaway on Stage 4 was by far the highlight. Other than that, I tried not to tax my body too much in hopes of recovering quickly for the USA Pro Challenge."

Champion System General Manager Ed Beamon said the race through the Colorado Rockies will be much different than Utah – which had its two hardest stages at the end. For the USA Pro Challenge, three of its seven stages feature uphill finishes and the final stage is an individual time trial.

"Although there are a couple of very hard days, I don't think this race will be as cut-and-dried," Beamon said. "I think there will be more opportunities for breakaway scenarios that could potentially have more of an impact. But with the final time trial, the general classification will be more dependent on the time trial than Utah was."