RealAspen News and Community Content Feed
By Real Vail
September 13, 2010
The initial 2015 World Alpine Ski Championships Coordination Commission meetings came to a close in Beaver Creek on Friday as members of the International Ski Federation, European Broadcasting Union, Tridem Sports, U.S. Ski and Snowboard Association and Vail Valley organizers wrapped up discussions on the proposed event management structure that will help guide the preparation and planning for the Championships over the next four and a half years.

“We had great meetings,” offered Vail Valley Foundation president Ceil Folz, “and we were able to achieve all of the things we needed to, namely, developing strong relationships with our new partners and building a confidence for them in our ability to host such a prestigious and large undertaking”. 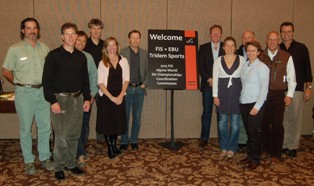 Major decisions on the horizon include the dates of the 2015 Championships, which should be finalized by November of this year, as well as the naming of the Organizing Committee, which is slated for early December. Organizers will continue to work closely with the EBU regarding the designation of the host broadcaster for the event.

While the initial Coordination Commission meetings have come to a close, Vail/Beaver Creek 2015 organizers will participate in the final inspection for the 2011 World Championships in Garmisch-Partenkirchen, Germany later this month, while also traveling to the FIS Fall Meetings in Zurich, Switzerland to present a status report to the Alpine Committee.

The FIS Fall Meetings will also include a World Championships Organizer's Symposium for key members of the 2011 (Garmisch), 2013 (Schladming, Austria) and 2015 organizing committees.

Thanks for providing recent updates regarding the concern, I look forward to read more. Home Inspection

A good blog always comes-up with new and exciting information and while reading I have feel that this blog is really have all those quality that qualify a blog to be a one. Home Inspection

I curious more interest in some of them hope you will give more information on this topics in your next articles. Home Inspection

Wow! Such an amazing and helpful post this is. I really really love it. It's so good and so awesome. I am just amazed. I hope that you continue to do your work like this in the future also. Home Inspection

Wow what a Great Information about World Day its exceptionally pleasant educational post. a debt of gratitude is in order for the post. Home Inspection

I really enjoyed reading this post, big fan. Keep up the good work andplease tell me when can you publish more articles or where can I read more on the subject? Home Inspection