The show will be aired on over 43 million televisions across the nation through Race Central TV's national Television Partner, MavTV and its partners, and on Dish Network Channel 631.

"The Vail Automotive Classic was a blast and a well-run event," says Race Central Host Kurt Hansen. "We're excited to air the show, and are looking forward participating in the 2012 event again."

Race Central TV, through MavTV and syndication, reaches in excess of 80 million viewer homes in the United States and is distributed globally via Premium network partners, online, and through dozens of cable outlets such as Dish Network, Comcast, and Time Warner, Verizon and Fios. 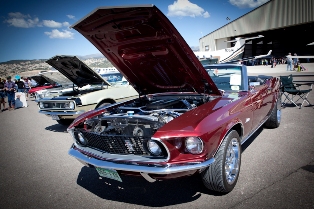 "Kurt Hansen and everyone at Race Central Media have been a huge asset to the VAC show," said VAC Board President Doug Landin. "This is the kind of coverage the show needs, reaching car fans nationwide. It promotes the Vail Valley with a new twist on tourism here."

In 2011, the VAC's second annual car, air and motorcycle show was a huge success with nearly 200 vintage and modern car, motorcycles and aircraft on display, and nearly 4,000 people in attendance at Saturday's event. The 2011 Best of Show Vail Valley Jet Center Award went to a 1936 MG SA Saloon (Fox field, CO) and a Challenger 300 owned by DB Aviation (Gypsum, CO).

The 3rd annual Vail Automotive Classic will return to the Vail Valley September 7-9, 2012. New this year is a car auction on Friday evening, September 7, which is also a fundraiser for VAC's charities, Jack's Place at the Shaw Regional Cancer Center, and Eagle Valley Senior Life, a nonprofit organization which provides daycare for patients with early stages of Alzheimer's Disease, as well as support for Alzheimer patient caregivers.

Race Central Media is your home for everything you want to know about Motorsports through Race Central TV and Race Central Radio. For more information, visit www.racecentralmedia.com.

The Vail Automotive Classic is a car, air and motorcycle show with something for everyone September 7-9, 2012. For more information, visit www.vailautomotiveclassic.com.