The lineup of live entertainment and events at Spring Back to Vail, the annual festival that celebrates the close of the winter season, will ramp up on Thursday, April 12 with a free concert in Ford Park from Grace Potter and the Nocturnals.

Grace Potter and the Nocturnals, who played Spring Back to Vail 2011 to rave reviews, will play a free show in Ford Park on Thursday, April 12, 2012. Named one of the “Best New Bands of 2010” by Rolling Stone and one of VH1's “Artists You Oughta Know,” the band is nearing completion of their fourth studio album, The Lion The Beast The Beat.

The band will be playing in Vail just before their first ever performance at Coachella, and it has been rumored that the band will play songs from their new album at Thursday's show. 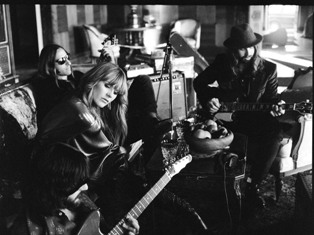 Grace Potter and the Nocturnals.

Following Coachella, the band will embark on a summer stadium tour with co-headliners Kenny Chesney and Tim McGraw, a pairing inspired by Grace's duet with Chesney on their CMA Award-winning single and video “You and Tequila,” which was nominated for multiple Grammy and ACM awards and was recently certified platinum for sales of over one million downloads.

There is no opener scheduled for this concert. The venue at Ford Park will open at 7 p.m, and Grace Potter and the Nocturnals will take the stage at 8 p.m.

In addition to the free concert, Thursday's schedule of events includes après and after-dark parties presented by Bud Light where guests can expect to find great specials on Bud Light and tons of fun giveaways:

Spring Back to Vail is the annual spring bash in Vail, Colo. celebrating the close of the skiing and riding season with a jam-packed schedule of events that includes free headliner concerts, nightly bar parties, the Spring Back to Vail Expo Village and the wet ‘n' wild World Pond Skimming Championships presented by Rockstar.

For more information on Spring Back to Vail, including the full event schedule and registration for the Pond Skimming World Championships presented by Rockstar, visit www.vail.com/springback.

Thanks for sharing this information. I really like your blog post very much. You have really shared a informative and interesting blog post with people.. Color Street MLM Review

There is definately a great deal to know about this subject. I like all of the points you've made. Color Street MLM Review

This is a smart blog. I mean it. You have so much knowledge about this issue, and so much passion. You also know how to make people rally behind it, obviously from the responses. Scam Risk

Wonderful blog post. This is absolute magic from you! I have never seen a more wonderful post than this one. You've really made my day today with this. I hope you keep this up! Scam Risk

Nice information, valuable and excellent design, as share good stuff with good ideas and concepts, lots of great information and inspiration, both of which I need, thanks to offer such a helpful information here. Scam Risk

Really impressed! Everything is very open and very clear clarification of issues. It contains truly facts. Your website is very valuable. Thanks for sharing. Scam Risk

What a really awesome post this is. Truly, one of the best posts I've ever witnessed to see in my whole life. Wow, just keep it up. Scam Risk

This is an awesome motivating article.I am practically satisfied with your great work.You put truly extremely supportive data. Keep it up. Continue blogging. Hoping to perusing your next post Scam Risk

It is extremely nice to see the greatest details presented in an easy and understanding manner. Scam Risk

I’ve read some good stuff here. Definitely worth bookmarking for revisiting. I surprise how much effort you put to create such a great informative website. Scam Risk