"Every one of us feels amazing support from our hometowns, but the reception the U.S. Ski Team receives in Vail is always something special," said Vonn, who became the first woman in American history to win in all five alpine disciplines with her season opening giant slalom win in Soelden, Austria. 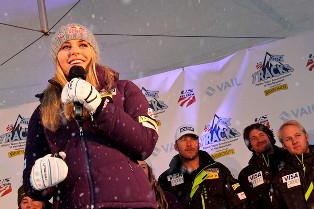 Fans cheered as Team athletes from all levels, Development to World Cup, took the stage. Many of them hope to return to the Rocky Mountain village for their shot at gold when the FIS Alpine World Ski Championships return to Vail and Beaver Creek in 2015.

"There is an incredible amount of momentum with this team," said U.S. Ski Team Alpine Director Patrick Riml. "We closed the last winter with multiple Audi FIS Alpine World Cup titles and opened 2012 with back-to-back wins by Lindsey and Ted in Soelden. Now it's time to take that momentum and continue to execute."

Vonn, who currently owns more World Cup victories than any American (male or female with 42) will seek to capture her fourth overall World Cup title after missing the notch by three points to German Maria Hoefl-Riesch when the final race of the 2011 season was canceled due to snow conditions.

It will be the 15th World Cup season for Miller, the most decorated U.S. Olympic alpine skier, who says he still has the passion to compete at the highest level and looks to continue to be a positive influence on the development of the sport.

Ligety, the 2011 giant slalom World Champion, showed strong signs of defending his World Cup giant slalom title (his third) with victory in Soelden, but hopes to move his slalom skiing back to the World Cup podium. A resurgence in slalom and continued strength in speed events, particularly super G, may move Ligety closer to a World Cup overall title.

For Mancuso, who won the final downhill of the World Cup season, 2012 is about continuing to stride back towards World Cup title contention after finishing third in both downhill and super G standings and fifth in the overall ranks in 2011.

"Lindsey, Bode, Julia and Ted have their goals and we have a clear plan in helping them to attain those goals," added Riml. "But we have a strong group of young athletes ready for the World Cup podium and we're also looking forward to strong returns from a number of injured athletes."

World Cup action hits full stride in North America with the Nature Valley Aspen Winternational featuring Vonn and Mancuso on Thanksgiving weekend in Aspen, CO followed by the Audi Birds of Prey races Dec. 2-4 in nearby Beaver Creek where Ligety is the defending giant slalom champion.

Both Aspen and Beaver Creek World Cup events will be air on NBC. For a complete U.S. Ski Team broadcast calendar, go to http://usskiteam.com/tv.

The U.S. Alpine Ski Team will be outfitted by Spyder, who has been the official uniform supplier of competition wear since 1989. To get the gear worn by the U.S. Ski Team, check out http://shop.usskiteam.com.