Review: 'The Last Deployment: How a Gay, Hammer-Swinging Twentysomething Survived a Year in Iraq'

They've become as familiar to you as your own living room: auditoriums filled with uniformed, spine-straight soldiers on their way to deployment, or smiling men and women, arms full of family, on their way home.

And no matter what auditorium they're in, no matter which small town or big city, you can bet that the first group is wondering what the second group has seen.

They may never know, though, because much is buried and more is classified. But military secrets aren't the only ones kept in times of war. In the new book “The Last Deployment” by Bronson Lemer, you'll learn one of them. 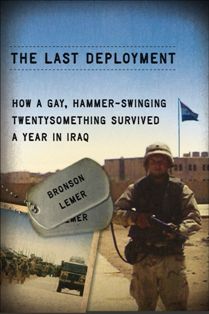 A review of “The Last Deployment: How a Gay, Hammer-Swinging Twentysomething Survived a Year in Iraq” by Bronson Lemer c.2011, University of Wisconsin Press $24.95 U.S. & Canada 223 pages

Bronson Lemer was “probably the last person anyone expected to join the military.” But, as the oldest of six children, he wanted to get away from North Dakota and “the army… happened to be at the right place at the right time.”

Lemer was still in high school when he joined the National Guard.

Five years later, on January 20, 2003, his cell phone rang. Though he was months away from getting out of his Guard obligation and was “tired of it”, Lemer learned that he was being deployed. His “horrible decision” to join the National Guard was turning into something he never thought he'd have to worry about: Lemer was a gay soldier under a Don't Ask, Don't Tell policy.

But in going to Iraq, he knew he had to learn to rely on his fellow soldiers, and vice versa. So he tried to relax as he traveled with them to Colorado and, later that spring, to Kosovo, then to Iraq. Lemer went along with the jokes, the girlfriend talk, and the “adolescent” behavior. He participated in anything that banished the boredom of guard duty, building, cleaning duty, and outhouse duty. He emailed a former love, and longed for home.

As a few months' tour of duty stretched into a year, Lemer began to notice something: deployment was taking its toll on everybody. The men and women who left the States were not the same people who came home from Iraq.

And neither was Lemer.

Over the past decade, you've undoubtedly seen lots of TV and read many words about the War in Iraq. But just wait until you get your hands on “The Last Deployment”…

Author Bronson Lemer's memoir of being a gay man in the military is half sass and half sad with a few heart-pounding moments but no blood-and-guts. His story moves between idyllic memories of his growing-up and warm feelings for his bunkmates and co-soldiers, while readers are also placed in the center of the boredom of waiting, the frustration of not knowing, and the dismay of hiding in order to be accepted. Lemer's is a wonderfully descriptive, wryly humorous, heart-crushing story, and I couldn't put it down.

With the repeal this month of Don't Ask Don't Tell, this is timely and definitely worth a read. If you love a soldier, your country, or both, “The Last Deployment” is a book you'll want to tell everybody about.

7 Comments on "Review: 'The Last Deployment: How a Gay, Hammer-Swinging Twentysomething Survived a Year in Iraq' "

It can be said that circumstances make a person. Everything can be affected by the environment, lolbeans, no one can avoid it.

I like the helpful info you provide in your articles. I’ll bookmark your blog and check again here frequently. I am quite sure I’ll learn a lot of new stuff right here! Best of luck for the next! jaguarqq

I’ve read this post and if I could I desire to suggest you few interesting things or tips. Perhaps you could write word search next articles referring to this article.

I am glad to be a visitant of this consummate website ! , thanks for this rare information! . fyp138

Spot lets start work on this write-up, I truly believe this web site needs far more consideration. I’ll apt to be once more to see a lot more, many thanks for that information. צימרים בערבה