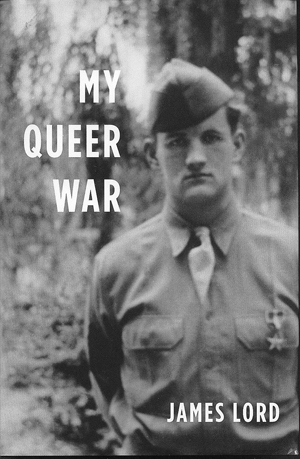 “My Queer War” by James Lord
c.2010, Farrar, Straus & Giroux - $27.00 / $31.00 Canada - 344 pages
Buy from Amazon now
The parade was just like every other. Same floats, bands, same politicians.But the same-old, same-old wasn't why you were standing curbside on a Sunday afternoon. This parade, you were looking for the flag-carriers.

Maybe one of them was your grandpa. Perhaps a friend, an uncle, or a woman who meant something to you. He encouraged you to enlist. She showed you how much you wanted to be a soldier.

But would you lie to do it? James Lord did, and in his memoir “My Queer War”, he admits that his tiny fib to Uncle Sam changed the course of his life.

James Lord hated college, just like he had hated prep school. A loner, Lord had always felt awkward, and the higher the educational setting, the higher the discomfort. Finally, he did the one incongruent thing he could think to do: nineteen and naïve, he enlisted in the Army Air Force eleven months after the Japanese bombed Pearl Harbor and decades before Don't Ask, Don't Tell.

By this time in his life, Lord suspected his attraction to boys, and he was horrified. He saw himself as “abnormal”, an “abominable thing.” Still, when asked at his induction, “Do you like girls?” he paused.

Much like his introduction to the Army, Lord's months of service were unique. Basic training was spent in a moldering hotel in New York. Assignments in California, Reno, and Utah were mostly of the hurry-up-and-wait kind, where boredom was rampant. Lord fell in love: the first time, with a man who was a mentor but almost turned him in; the second time, a confused longing. When the U.S. government sent him back to school, Lord, who was as green as grass, learned to cruise gay bars.

But the Army had further plans for James Lord. Sent overseas to France and Germany, Lord was assigned to the Military Intelligence Service, a job where he learned brutal truths about others and himself.

Several times in this book, the late author James Lord indicates his love of the arts, particularly the works of James Joyce, Thomas Mann, and others. He also expresses a love of poetry. All this shines through in his memoir, to the good and to the bad.

My Queer War” is a fine, sometimes-painful, sometimes-shocking, surprisingly chaste account of a man hiding from himself and his government, lest he be ridiculed and shunned. Lord is a fine storyteller with his smart-aleck humor and his goosebump-giving just-the-facts, somberly-gentle writing.

What's not enjoyable, though, is that this book is dripping with the influence of the aforementioned authors, as well as other creators of High Literature. While it admittedly gives this book a period flavor, it also tends to bog it down more than I think the average reader will want to endure.

Still, in these Don't Ask, Don't Tell times, “My Queer War” may provoke some thinking. If you're looking for such a memoir, enlist this one.