To paraphrase Robert Duvall in Apocalypse Now, “I love the smell of jet fuel in the evening.”

Especially when it's served with cocktails at one of the best new fund-raising events to hit the Vail Valley in years. I'm talking, of course, about the Star Dancing Gala inside a lavishly appointed airplane hangar at the Vail Valley Jet Center on Monday, July 25.

Now in its third year, the event pairs local celebs with professional dancers to work out elaborate dance routines over the course of the previous year. Yes, it's a blatant rip-off of “Dancing With the Stars,” but given the athletic prowess of many Vail Valley residents (and guests) – and their intense desire not to utterly humiliate themselves publicly – I can personally attest to the quality of the performances.

And I'm only kidding about the smell of jet fuel. I seriously have never seen an airport facility ever sparkle quite the way the Vail Valley Jet Center does for the Star Dancing Gala. The private aviation hub at the Eagle County Regional Airport near Gypsum – when coupled with the commercial operation – is one of the busiest airports in the state during the winter months.

Snow riders jet in from all over the world, headed ultimately for the slopes of Vail, Beaver Creek, Aspen and Snowmass, and the Jet Center – with its piano lounge, bar and other luxe appointments – provides a stylish entry point for those saddling up their Gulfstream III. 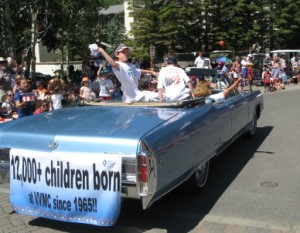 This 1965 Cadillac, shown here in Monday's Fourth of July parade in Vail, is just a small taste of the Wheels and Wings show set for the Vail Valley Jet Center and Vail Village in September.

Also, the Star Dancing Gala benefits one of the best possible causes in the valley, the well-run and highly worthy Youth Foundation, which in its own words prepares “children in need for success in life through education and recreational opportunities.” I've seen their programs in action and seriously can't recommend a better local charity. Tickets are $250 per guest and include a five-course dinner and the aforementioned cocktails and entertainment.

But if you think that's the end of the partying at the Jet Center this summer season, think again. Sept. 10-11 marks the return of another entertaining newbie on the local social scene at both the airport and 35 miles “up valley” in Vail Village. That's when the Vail Automotive Classic Wheels and Wings Show returns for its second year.

All the car, planes and motorcycles will be judged in a variety of categories, and then everyone hits the road for a slow-speed rally up U.S. Highway 6 to the Westin Riverfront Resort and Spa in Avon and an evening of festivities. The next day, Sunday, Sept. 11, the award winners and other classic cars will be on display on the cobblestone streets of Vail Village after an opening breakfast on Pepi's deck at Gastof Gramshammer.

“This kind of show in Vail is a real treat, showcasing the art of the machine in this amazing Rocky Mountain ski resort town. And, everyone can enjoy the Vail Farmer's Market and Oktoberfest in Lionshead at the same time,” said event organizer Doug Landin.

Landin provided a sneak preview during last weekend's Vail America Days Fourth of July parade in Vail, driving a 1965 Cadillac convertible to commemorate the first year of the Vail Valley Medical Center. My three young sons – all born at the Vail hospital – were passengers (see photo).

The first Wheels and Wings Show was a huge hit last year, and it's only gotten bigger and better this year.