You know exactly what your pet is thinking. The wag of the tail, the flick of an ear, a well-placed paw or nose tells you everything you need to know.

You've been an animal lover since you can remember, a trait you share with humans reaching back millennia. But the way we treat animals now is not the way it's always been. In the new book “The Bond” by Wayne Pacelle, you'll find out why.

In one way or another, we've all grown up with animals. Research shows that 90 percent of the characters in children's picture books are animals. And who can forget the television shows we watched and the toys we played with? 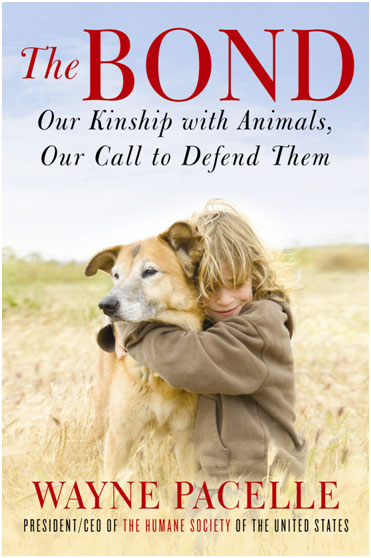 While it's uncertain when animals were first welcomed to ancient hearths, humans seem to be biologically wired to live with them. Hormones that bond people together also serve to bond us with our furry friends. Studies show that having animals around is good for us, and vice versa.

Animals needed advocates, and the American Society for the Prevention of Cruelty to Animals (ASPCA) was founded just after the Civil War. Just decades later, Henry Salt “laid the groundwork for the modern approach to animal rights” with a paper he wrote on the subject. Charles Darwin weighed in, arguing that there was little difference between human and animal. Science is just now beginning to agree.

In his work with the Humane Society of the United States, Pacelle has seen some things that shocked him and some that give him hope. He writes of “the rising political strength of HSUS” and the work done to change California's slaughterhouses. He says the organization was never meant to limit itself to companion animals and that the “concern reaches to all animals” that are being exploited or mistreated.

Though controversy seems to follow author Wayne Pacelle everywhere, it's hard to argue with many aspects of this book. Nobody, for instance, wants to see animals suffer, and action to prevent it would seem prudent to the vast majority of people. That emphasis here – and especially, the hopeful and heartwarming chapter on the aftermath of Hurricane Katrina – is very much worth reading.

But still, and despite that Pacelle often seems to choose his words carefully, there's contention all over “The Bond”, no matter which side of the animal rights fence you're on.

In this book, Pacelle takes on farmers and hunters, zoo-goers and meat-eaters, the government, gun owners, Canadians, homeowners, scientists, and some veterinarians. He has much to say about dolphins, “downer” cattle, dog breeders, and elephant “trainers”. And, by dealing with the Elephant in the Room, he challenges football-minded animal lovers by discussing his contentious work with Michael Vick.

If you decide to read this book, do so with curiosity about our human-animal bond and the understanding that what's in here probably isn't going to change anybody's mind - though, for sure, in disputative circles, “The Bond” is going to make the fur fly.

Pretty good post. I just stumbled upon your blog and wanted to say that I have really enjoyed reading your blog posts. Any way I'll be subscribing to your feed and I hope you post again soon. Big thanks for the useful info. MayUmbaNationalpark.com

Thanks for the blog loaded with so many information. Stopping by your blog helped me to get what I was looking for. create a wikipedia page

There has never been a more convenient time to buy perfume from the UK. You may now shop at Good Girl Perfume Dossier.co using Forwardvia, no matter where in the world you are, and you can use Forwardvia to have the risky items shipped directly to your home using Forwardvia. waffle game

I haven’t any word to appreciate this post.....Really i am impressed from this post....the person who create this post it was a great human..thanks for shared this with us. https://startupo.fr/course/201/

Thank you for taking the time to publish this information very useful! prodentim review

I was reading some of your content on this website and I conceive this internet site is really informative ! Keep on putting up. who is calling me from this number

I read that Post and got it fine and informative. ortaklığın giderilmesi davası

CFB began these experiments of denim product production using environmentally friendly processes and procedures. This company has had a lot of success in this field of clothing. If you are looking for a reliable as well as a reputed company to manufacture your denim products, CFB is the best way to go. Clothing Manufacturer

A very nice blog, I like the way you share very honestly and interestingly, through my blog I learned a lot of things. run 3

You make so many great points here that I read your article a couple of times. Your views are in accordance with my own for the most part. This is great content for your readers. click here

Thank you for your post. I have read through several similar topics! However, your article gave me a very special impression, unlike other articles. I hope you continue to have valuable articles like this or more to share with everyone! nytimes crossword

Thank you because you have been willing to share information with us. we will always appreciate all you have done here because I know you are very concerned with our. imr 8208

When your website or blog goes live for the first time, it is exciting. That is until you realize no one but you and your. https://termpapermaster.com/custom-term-paper/

Nice to read your article! I am looking forward to sharing your adventures and experiences. bwclub88

Nice to read your article! I am looking forward to sharing your adventures and experiences. đại lý sữa đà lạt milk

This is just the information I am finding everywhere. Thanks for your blog, I just subscribe your blog. This is a nice blog.. regali di natale

Good sharing! To learn how to take screenshots. how to screenshot on windows?

You re in point of fact a just right webmaster. The website loading speed is amazing. It kind of feels that you're doing any distinctive trick. Moreover, The contents are masterpiece. you have done a fantastic activity on this subject! 토토

The forums you share are really helpful to me, I will follow your posts regularly. For more information about me, go here: nytimes crossword

I definitely enjoying every little bit of it and I have you bookmarked to check out new stuff you post. ắc quy ups cao cấp hiện nay

A very awesome blog post. We are really grateful for your blog post. You will find a lot of approaches after visiting your post. Hawaii Fake ID

i never know the use of adobe shadow until i saw this post. thank you for this! this is very helpful. Health wellness diabetes insulin

You make so many great points here that I read your article a couple of times. Your views are in accordance with my own for the most part. This is great content for your readers. link judi rajaslot88