RealAspen News and Community Content Feed
By David O. Williams
Real Aspen – March 31, 2011
So I was feeling pretty good about myself the other day at Vail. It was one of the better powder days of a stellar season packed with memorable snow days, and when I got home and logged onto my EpicMix account I found out I'd gone “Over the Moon,” the virtual pin designating more than 350,000 vertical feet of skiing. I did it in 36 days at three Vail Resorts' mountains – mostly Vail – and if you include two days each at Crested Butte and Snowmass, I'm right at 40 ski days for the season. 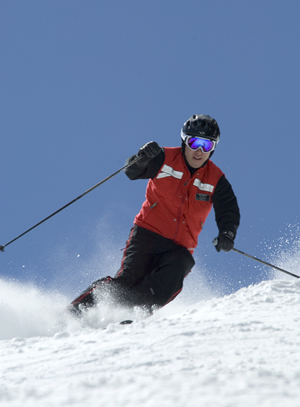 Then I logged onto Twitter and found a tweet on Vail Resorts CEO Rob Katz's account saying he earned his “Orange Slices” pin on March 23 for exceeding 500,000 vertical feet. Doing some quick math, if I topped 350,000 vertical (remember, Vail Mountain top to bottom is 3,000 vertical feet) in 36 days, that's about 10,000 vertical a day. So Katz has to be at least at 50 ski days, and on March 22 he also earned his “Smorgasbord” pin for “hitting all five mountains this season.”

Suddenly, I wasn't feeling so “Over the Moon”.

Don't get me wrong, I don't begrudge Katz, the SkiEO who lives in Boulder, his 50-plus days on snow. In fact, I think it's a great thing that he's on his mountains so much, seeing what works and what doesn't work, and that he's often going through what a lot of his Front Range customers have to go through to get to his four Colorado Resorts.

I even think it's a good thing he's been out to Heavenly this season so his California holdings don't feel left out in the cold (although shouldn't that pin now include Northstar-at-Tahoe?). And I would be the last guy to bash him for spending too much time on the snow instead of chained to a desk obsessing about what the shareholders want.

No, I'm just pissed that he's so far out ahead of me on EpicMix.

At first I thought the ski-tracking platform with the heavy social media component was a serious geek-fest – like the guy at heli-camp who repeatedly brags about his 20,000 vert that day instead of just blissing out about that one perfect run where it all came together over the course of 30 perfect turns in thigh-deep powder. I'm a quality over quantity kind of guy.

And given the multiple hats I wear – father of three boys ages 10 to 4, energy and environmental reporter for the Colorado Independent, occasional talking head and “energy expert” on TV and radio, managing partner in the Real Vail and Real Aspen websites – I'm always pretty psyched if I get 45 days in one ski season. That's a month and half of the year on skis.

I'll get there again this season, and I'll likely at least earn my “Lincoln (Four Score)” pin for 400,000 vertical. But I'm likely not going to achieve Roosevelt (Airborne Division) for 450,000 and I'm definitely never going to sniff “Orange Slices” for 500,000. Unless we count those days at rival resorts Crested Butte and Snowmass, but that's a whole different ski-tracking system – one that likely involves satellites and GPS.

Anyway, I've now overcome my EpicMix aversion, which in no way absolves it of its geek-fest status (in fact it probably enhances it). The competitive nature of EpicMix and of recreational skiing itself is what makes it worth logging onto. You can tweet your buddies who are stuck in their cubicles in New York and you can rank yourself among those who clearly have too much free time on their hands.

Of course, to do that you have to make your profile public, and that's where I draw the line. Given my multiple work hats, I don't need everyone knowing I just bombed Genghis in a foot of fresh.

Such a very useful article. Very interesting to read this article.I would like to thank you for the efforts you had made for writing this awesome article. slot4d

I was taking a gander at some of your posts on this site and I consider this site is truly informational! Keep setting up.. sustainable

This is very useful post for me. This will absolutely going to help me in my project. Custom shoes

This is my first time i visit here and I found so many interesting stuff in your blog especially it's discussion, thank you. logo cookies

My friend mentioned to me your blog, so I thought I’d read it for myself. Very interesting insights, will be back for more! zimperiumfoundation.com

When your website or blog goes live for the first time, it is exciting. That is until you realize no one but you and your. obuv s plni spickou

It is perfect time to make some plans for the future and it is time to be happy. I've read this post and if I could I desire to suggest you some interesting things or suggestions. Perhaps you could write next articles referring to this article. I want to read more things about it! Apply birth certificate online

I have a mission that I’m just now working on, and I have been at the look out for such information swimwear

I am still in shock to see the amaizng performance of https://www.signnow.com/ask/comprehensive-guide-to-how-to-sign-and-date-a-pdf-as-an-hr-manager-or-director. For sure it is one of my favorite platform. Highly recommended!

I wanted to thank you for this great read!! I definitely enjoying every little bit of it I have you bookmarked to check out new stuff you post. Indian restaurant

Through this post, I know that your good knowledge in playing with all the pieces was very helpful. I notify that this is the first place where I find issues I've been searching for. You have a clever yet attractive way of writing. MuscleXP Instantized BCAA 6000 with L-Alanine & Taurine

In a news release, Vail Resorts said Katz will remain fully active and engaged in take my class company's key strategic decisions and priorities while moving out of day-to-day operations.

I wish more authors of this type of content would take the time you did to research and write so well. I am very impressed with your vision and insight. 小額貸款

i was just browsing along and came upon your blog. just wanted to say good blog and this article really helped me. 貸款

Thanks for taking the time to discuss this, I feel strongly about it and love learning more on this topic. If possible, as you gain expertise, would you mind updating your blog with extra information? It is extremely helpful for me. https://homedesigninstitute.com/course/203/

I read that Post and got it fine and informative. https://bookmarklethq.com/story12875304/the-definitive-guide-to-startupo-fr

Great survey, I'm sure you're getting a great response. japandi style

I read that Post and got it fine and informative. شركة نقل عفش بالطائف

Thank you for sharing superb informations. Your website is so cool. I am impressed by the details that you have on this web site. It reveals how nicely you understand this subject. Bookmarked this website page, will come back for extra articles. You, my friend, ROCK! I found just the information I already searched everywhere and just could not come across. What a great web-site
Calentadores De Pies Y Manos