Book Review: The Obamas: The Untold Story of an African Family 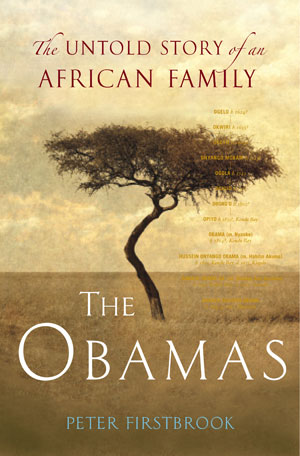 Your grandfather told you many things about his grandfather: how he survived, how he lived, how he relaxed. You wish you had paid attention to what was said, but you were just a kid. Now, you wish you could tell those tales to your own children.

On the night of Barack Obama's inauguration just over two years ago, Peter Firstbrook was in Kenya, watching the event on a fuzzy-screened black-and-white television powered by a generator. He had gone there just after the election to research the President's family and knew there was a “fascinating story to be told.”

President Obama is, like most Americans, of varied heritage. He's 50 percent English mixed with Welsh, Irish, German, Scottish, and Swiss. And he's 50 percent African, descended from the Luo of Sudan and Kenya.

Tribal connections are extremely important in Kenya, and the Luo is the third-largest tribe in that country. As a whole, they're known for their emphasis on education, their easygoing nature, and their generosity. And, Firstbrook says, “they also had a reputation for… talking big and doing very little.”

Opiyo was born during a tumultuous time, when slave trading was widespread and British colonialism was almost ending. Still, he built his own compound, took several wives, and raised his own family, including at least two daughters and three sons. His middle son, Obama, became the President's great-grandfather.

Obama begat Onyango, who was progressive, eccentric and quite the ladies' man. He was also aggressive, and “stole” one of his wives, Sarah. She later bore him a son, Barack, who was the father of our President.

“The Obamas” is lively, sweeping, grand, horrifying, and occasionally funny; a historical biography of a continent, a way of life, a people and, somewhere along the way, the Leader of the Free World.

Author Peter Firstbrook is a first-rate storyteller, and though President Obama's lineage can be somewhat confusing, Firstbrook makes it relatively understandable. Though some tales will make you gulp, he also entertains readers with cultural explanations, imaginative scenarios, hypothetical situations, and small anecdotes. I enjoyed that, partly for the way Firstbrook presents the information and partly for its relevance in today's world, as compared to yesterday's way of life.

If you're a “birther”, you won't find much in this spirited account of one family's long history. For the curious, or anyone who just loves a great story, though, “The Obamas” deserves a closer look.

0 Comments on "Book Review: The Obamas: The Untold Story of an African Family"