Beaver Creek was the big local winner in the snow sweepstakes from the latest storm system, which brought more cold than skiable precipitation to the Vail Valley.

Still, the Beav' reported eight inches of new snow at 5 this morning, compared to just two for Vail. That's the reverse of a season-long trend that's seen considerably more snow at Vail than its down-valley sister resort just 10 miles to the west.

But I can guarantee that even when it doesn't snow quite as much at the Beav', what snow does falls tends to last a little longer. For such a massive mountain, Vail gets skied out quickly, sending me deep into the trees in search of the untouched stuff.

Beaver Creek doesn't see the same amount of skier traffic, so some areas of the mountain tend to be untrammeled much later in the day. One such spot is the skier's left tree line on Ripsaw, a run in Beaver Creek's Rose Bowl area. Spider is another nice run under the creaky old fixed-grip Rose Bowl Lift that was built in 1980 and installed in 1986. 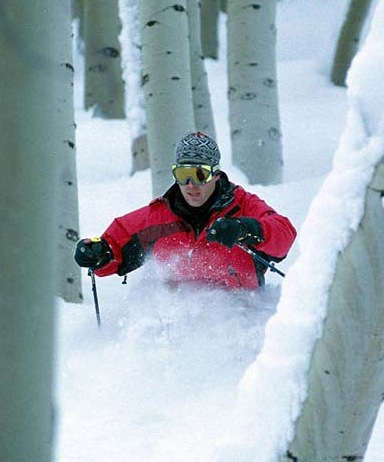 Vail Resorts wants to replace it with a high-speed quad that some fear will lead to Rose Bowl being overrun by eager powder hounds. The U.S. Forest Service, which owns and manages the public land on which Beaver Creek operates, is taking comments on the plan until Feb. 12.

Be sure to include your name, address, phone number and the organization you represent, if you're representing an organization. Be specific on why or why not the new lift should be approved, including any supporting materials. But be aware your comments will become part of the public record, so don't go too crazy.

If the Forest Service gives the nod, Vail Resorts will most likely replace the Rose Bowl Lift this coming summer and fall.

The Forest Service in a recent scoping letter wrote that the “terrain served by the lift is largely underutilized due to the lower lift capacity and longer ride times that no longer meet the service expectations of forest visitors at Beaver Creek.” Sounds like they've kind of already made up their collective bureaucratic minds. But I'm sure they're still all ears.

The uphill capacity will go from 1,600 people per hour to 2,400 per hour and ride times will drop from 11 minutes to five minutes. Will that mean no more stashes on Ripsaw and Spider? Probably not. After all, Grouse Mountain has a high-speed quad and still stays fresh well into the afternoon.

I also wasn't big backer of those who felt replacing Chair 5 would lead to the ruination of Sun Down Bowl at Vail. It hasn't. All it does is move people eastward faster, getting them out into Tea Cup, China, Outer Mongolia and Blue Sky Basin more quickly. Now we need a high-speed to replace the fixed-grip Chair 17 in Sun Up Bowl.

But that's just my take. What's yours? Share it here first and then forward it on to the Forest Service by Feb. 12.

Well, I'd like to think that I'm that ol' townie who wants to keep things "real". But in order to compete with the resorts in Utah, (Deer Valley), Vail Resorts has to do everything it can to keep up with the fast paced lives of every day Americans. And the Forest Service is already giving the nod even though they'll go through the red tape of asking the public. I love that part of the mountain, and it's funny you mention the left side of Ripsaw, cause its the only side of that whole bowl I ski. Stop poaching my lines. Anyway, it is what is. If we want to compete with the best we need to offer the best, and with 2015 on the horizon, it makes total sense.

It's been a week since the latest storm, and Beaver Creek is still in high spirits. So much so that they've decided to replace their Rose Bowl chairlift with one that will be able to take more people at once. The new lift will also have best writing services view of the mountain! If you're feeling adventurous this winter, check out some of these other things Beaver Creek has planned for the season.

There has been lot of crisis going on regarding social issues around the area. At last here is an efficient method put forward by the authorities for tackling the problems. There will be certainly a lot of change if the suggested project becomes a reality. senior assisted living

Middlemen will do everything they can to stop you from visiting the location of production, even though they will insist that they work there. Guangzhou products sourcing

You made some decent points there. I looked on-line for your issue and found most people should go coupled with together with your internet site. https://strongtoto.com/토토분석