RealAspen News and Community Content Feed
By David O. Williams
Real Aspen – November 19, 2010
Nearly three feet of new snow in the last week has allowed Vail to open today with 11 lifts, including the Vista Bahn and the Eagle Bahn Gondola (so both the Vail Village and Lionshead portals), and nearly 1,200 acres of terrain. Even Game Creek Bowl will be open to snow riders.

In fact, there's been so much early season snow that Vail Resorts announced Thursday that season pass restrictions have been lifted for both Vail and Beaver Creek (opening Wednesday) for the Thanksgiving holiday weekend.

And you can always keep checking back with Real Vail for snow conditions and weather information now that we've added Vail Resorts and Colorado Ski Country USA snow reports. Also new today, a video player on the home page, where we will periodically post video from around the Vail Valley or elsewhere in the mountain West.

Be sure to check us out before heading up to ski Vail this weekend or before you hit the Beav' next weekend. Of course, you may want to drive another hour or so west on Interstate 70 and south on Highway 82 to Aspen, where Aspen Mountain and Snowmass open for the season Wednesday. Saturday and Sunday, Vail's Lindsey Vonn and Sarah Schleper will compete in the Aspen Winternational World Cup races those days.

According to the U.S. Ski Team, the annual Aspen World Cup races – the only U.S. stop for the top women's ski racers in the world -- received an official green light Thursday from the International Ski Federation (FIS), which certified there's more than enough snow.

That means the top American racers, many of whom have been training at Vail and Copper Mountain, will be able to get on the Aspen courses (the giant slalom is Saturday and the slalom is Sunday) for some pre-race training. 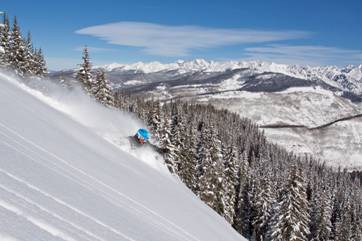 Bruce Ruff on Thursday got a sneak preview of Vail Mountain's opening day on Friday.
By Cody Downard/Vail Resorts
“It's awesome to be able to get on the hill early,” U.S. women's technical head coach Trevor Wagner said in a release. “It allows us to get a look at the terrain and give the girls some confidence on the slope before race day. With this being such an early race, it's not easy to get the hill ready in time for us to train on it, but Aspen did a great job maximizing the natural snow to give us a few days on it.”

The men, including Olympic medalists Bode Miller, Ted Ligety and Andrew Weibrecht, will be at Lake Louise, Alberta, Canada, for a World Cup Thanksgiving weekend. Then they come to Beaver Creek for the annual Birds of Prey World Cup Dec. 3-5.

The women warmed up for Aspen with FIS-sanctioned races at Copper Mountain Tuesday and Wednesday. Schleper looks to be in great early season form. She beat out teammate and Olympic gold and silver medalist Julia Mancuso in a slalom race at Copper Wednesday and then celebrated with some powder skiing.

“It was my first win of the year and my first powder of the year,” Schleper told the Vail Daily. “Which is better is a hard call. Nothing beats a powder day, except maybe a win. It's like cake with frosting.”

If you can't make it over to Aspen to watch the women next weekend, ski at Vail or Beaver Creek and check out all the action on TV. Here's the full schedule or go to www.aspensnowmass.com for the actual race schedules.