When I went to bed around 1 a.m. Monday, it was only lightly snowing in West Vail. When I got up around 6:30 a.m., it was absolutely dumping, with five inches or more already on my deck.

After a slow weekend of meandering snowfall, the heavens really opened up, and by the time I dropped my youngest son off at daycare around 9:30 a.m. and shot the below video at Vail's Golden Peak area, it had already dropped another couple of inches. 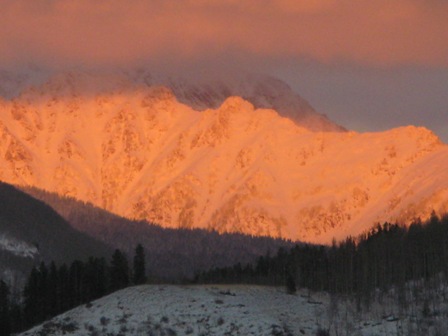 Sunset and snow on Vail's Gore Range, as seen from West Vail.
By David O. Williams

Even my plow guy was caught off-guard since it was mostly sunny down-valley in Eagle and Edwards. My driveway was an adventure on the first official day of plowing.

But these are good problems to have four days before Vail's official opening on Friday, Nov. 19. A spokeswoman for Vail Resorts just emailed that she'll have some sort of announcement regarding how much terrain will be opening, and I'll post that as a news story as soon as it comes in.

We'll have other useful information in the hub, including Reid Griebling's popular Powder Predictor blog and a home for video like this one I shot at Golden Peak this morning (only much, much better).

Ski racers were already heading up the hill when I was there this morning, although crews had yet to do the evil deed of clearing away all that powder for the water-injected, ice-hard race course underneath. And the big guns of the team are on their way back for more training after a World Cup over the weekend in Finland.

They may be surprised at just how many more training lanes are available after the last week of steady snow. Vail/Beaver Creek and the rest of the state's resorts are headed for what could be a record-setting Thanksgiving in terms of available terrain.

Winter Park is next to open on Wednesday, Nov. 17, followed by Vail and Eldora on Friday. That will give us nine resorts up and running. Beaver Creek opens a week from Wednesday, the day before Thanksgiving on Nov. 24.

Let's hope the snow gods keep smiling on us.

Indeed the snow gods too would like to bid farewell to the 2009 El Nino season as more moisture than expected as hit the northern and central mountains of Colorado. I'll admit it is hard to forecast storm in our area, but I sure do like being off in the right direction. Rumor has it East Vail reported at least a foot of snow this morning during the "rush" hour. Hooray for snow, more on the way. Keep it here at R.V. for on the spot details.