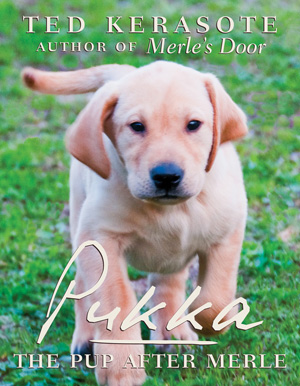 “Pukka: The Pup After Merle”
by Ted Kerasote
Buy from Amazon
Time is your best friend.

That's because your real best friend is gone and it seems so disrespectful to bring another pet into the house. You physically hurt just thinking of your old buddy. Truly, there will never be a replacement.

When author Ted Kerasote lost his beloved Merle a few years back, he wasn't looking for a new dog. He wanted to give himself some time to mourn, but a chance encounter hundreds of miles away led him to “Pukka: The Pup After Merle”.

Just before Ted Kerasote met the yellow lab named Abby, she'd had a litter of puppies. Kerasote, author of “Merle's Door”, was on a book tour then and he couldn't take a puppy home. But he never forgot about Abby.

A year later, when there was another litter, Kerasote flew to Minnesota to see the pups. Seven weeks hence, he went back and picked a new pal.

It was a long drive from Minnesota to Kerasote's home in Wyoming, but the pair had a good adventure. Along the way, the pup gained a name, Pukka, which is pronounced like a hockey puck and is a Hindi word that means “genuine” or “real”.

And thus, Pukka came to live in the mountains near Jackson, Wyoming.

As the seasons passed, Pukka grew and learned. He learned to come when called and to walk on a leash. He made some new friends, both the canine kind and otherwise, even though some animals were for watching and not for chasing. And he made his peace with water, which was scary at first.

When he was old enough, Kerasote began taking Pukka on trips and on long hikes. They climbed tall mountains and rafted wide rivers, visited big cities and small post offices. Pukka learned to scent and hunt, he learned his manners, and he grew up. Hiking was Pukka's favorite thing, but as long as he was with Ted, it was all good. He and Ted were a team.

Pukka: The Pup After Merle” is filled with lots and lots of pictures; almost each page offers readers a photo or two of Pukka doing something cute or profound. But I say “readers” with caution because there's not much to read here. The pictures are the biggest feature of this book, which means there's not a whole lot of actual story involved. For most people, an hour is about all it'll take to finish.

What's worse – at least to me – is that this story is told “by Pukka”, which was cute the first time somebody did it, but it's been overdone to death since. Yes, the dog is adorable. No, I don't want a saccharine faux-“first-person” account of his first six months.

Having said that, I think this book is best served as a gift for someone who is absolutely bonkers-wild-silly over yellow labs. For everybody else, “Pukka” isn't worth the money or the time.

31 Comments on "Book Review: Pukka: The Pup After Merle"

This is really great hi how i really like this one!

Hello. Cool article. There’s an issue with the website in internet explorer, and you might want to test this… The browser is the marketplace chief and a large element of other folks will miss your great writing due to this problem. meyer mansion price

Youre so cool! I dont suppose Ive read anything like this just before. So nice to get somebody with original ideas on this subject. realy thanks for starting this up. this amazing site is one thing that is needed on the internet, a person with a little originality. helpful project for bringing something totally new to your world wide web! dinner cruise istanbul

Thank you, We have been recently looking for details around this topic forever and your own is the best I’ve discovered so far. Nevertheless, how about the bottom line? Have you been particular in regards to the supply? https://onohosting.com/affiliate-program

Thanks for sharing your ideas with this blog. Likewise, a misconception regarding the financial institutions intentions while talking about foreclosure is that the financial institution will not getreceive my repayments. There is a certain amount of time in which the bank will require payments here and there. If you are as well deep inside the hole, they may commonly desire that you pay the actual payment in full. However, i am not saying that they will have any sort of repayments at all. When you and the loan company can have the ability to work anything out, your foreclosure process may stop. However, in case you continue to skip payments in the new plan, the foreclosed process can pick up exactly where it left off. go now

I truly appreciate this post. I have been looking all over for this! Thank goodness I found it on Bing. You’ve made my day! Thx again! Objet Anti Stress

Now i am really fresh to wordpress blogs. however what you post on this site is absolutely very good and very beneficial. I believe it would help me in the future. Thanks for the excellent work. donutsforheroes.com/online-marketing-seo-techniques-an-important-tool-of-online-marketing

Woh I like your articles , saved to fav! . romanticpig.com/home-security-camera-systems-do-research-for-maximum-results

I have wanted to write about something like this on my webpage and you gave me an idea. Cheers. situs koinbola

This is truly good content and enlightening weblog, I praise what you’ve carried out right here, along with sharing excellent information with great tips and concepts, I’m really pleased to submit my comment on this weblog, many thank you’s towards the author. 안전 카지노

I am really impressed with your writing abilities as smartly with the format on your weblog. Is this a paid subject or did you modify it yourself? Either way stay up the excellent quality writing, it is rare to peer a nice blog like this one nowadays.. 悅刻

스포츠분석 Considerably, the story is in reality the greatest on this noteworthy topic. I agree with your conclusions and will eagerly watch forward to your next updates. Saying nice one will not just be sufficient, for the wonderful clarity in your writing. I will immediately grab your rss feed to stay privy of any updates!

Kanada ETA Onlayn I went over this web site and I conceive you have a lot of great info , saved to my bookmarks (:.

casino en ligne fiable Thanks so much regarding giving my family an update on this subject on your blog. Please understand that if a brand new post becomes available or if perhaps any variations occur with the current posting, I would be considering reading more and focusing on how to make good usage of those tactics you share. Thanks for your efforts and consideration of others by making this web site available.

카지노 Hi there, just became alert to your blog through Google, and found that it’s really informative. I am gonna watch out for brussels. I will be grateful if you continue this in future. Many people will be benefited from your writing. Cheers!

Can I just now say that of a relief to locate somebody who truly knows what theyre speaking about online. You actually know how to bring a difficulty to light and work out it crucial. The diet need to see this and appreciate this side on the story. I cant believe youre no more popular since you definitely possess the gift. https://www.taiwannews.com.tw/en/news/4072757

Indisk Visa Online Great article! This something that I always want to see.

sell my house charleston An interesting discussion will probably be worth comment. I think that you can write more about this topic, it might not certainly be a taboo subject but usually individuals are inadequate to speak on such topics. To a higher. Cheers

https://www.nervous.fr Excellent editorial! Would like took pleasure the particular following. I’m hoping to learn to read a lot more of you. There’s no doubt that you possess tremendous awareness and even imagination. I happen to be very highly fascinated using this critical information.

visto de turista canadá Network Marketing is of course very popular because it can earn you lots of money in a very short period of time..

Richiesta di visto per la Turchia Woah! I’m really enjoying the template/theme of this blog. It’s simple, yet effective. A lot of times it’s very difficult to get that “perfect balance” between user friendliness and appearance. I must say you have done a great job with this. In addition, the blog loads extremely quick for me on Chrome. Exceptional Blog!

Transport maszyn Hi, i think that i saw you visited my web site so i came to “return the favor”.I am trying to find things to enhance my web site!I suppose its ok to use some of your ideas!!

비아그라 구입 Good day! I could have sworn I’ve been to this blog before but after reading through some of the post I realized it’s new to me. Nonetheless, I’m definitely glad I found it and I’ll be bookmarking and checking back often!

Touristenvisum für die USA You need to get involved in a tournament personally of the best blogs over the internet. I most certainly will recommend this great site!

Деловая виза в Индию I used to be suggested this website by way of my cousin. I’m no longer positive whether this post is written by means of him as no one else recognize such particular about my difficulty. You’re amazing! Thank you!

Berettapx4storm Write more, thats all I have to say. Literally, it seems as though you relied on the video to make your point. You definitely know what youre talking about, why throw away your intelligence on just posting videos to your site when you could be giving us something enlightening to read?

บริษัทรับจ้างทำ seo Some truly nice and useful info on this site, likewise I conceive the style holds excellent features.

Garage door repair calgary Nice post. I learn some thing very complicated on different blogs everyday. Most commonly it is stimulating you just read content off their writers and rehearse a specific thing from their website. I’d would prefer to use some while using content on my small weblog whether or not you do not mind. Natually I’ll provide you with a link on your web weblog. Appreciate your sharing.

UNITED STATES BUSINESS VISA To tell you the teuth, I was passing around and come across your site. It is wonderful. I mean as a content and design. I added you to my list and decided to spent the rest of the weekend browsing. Well done!