Solo hiking on Holy Cross without a cell phone ... not advisable but also not unprecedented

James Nelson, 31, of Chicago, has been missing on or near Mount of the Holy Cross in the wilderness of Eagle County for more than a week now.

His fiancé called authorities Friday and Vail Mountain Rescue hit the ground running Saturday, just as the weather finally took a turn for the worse after weeks of above-average temperatures.

Nelson, a member of a hiking and climbing group in the Chicago area, apparently was hiking solo on a 25-mile route around the only 14,000-plus-foot peak in the immediate Vail area. And while he is otherwise well equipped, Nelson is not carrying a cell phone -- an almost mandatory rescue mechanism these days.

One hears stories these days of people calling 911 just a few hundred yards from the trailhead because their feet are sore. The one and only time in my nearly 20 years in Vail that I climbed Holy Cross, I did it solo, and I did it without a cell phone, which back in 1993 would have been the size of a small brick.

There will soon be numerous posters and bloggers berating Nelson for hiking alone (if that's indeed the case, because the sheriff's office release is pretty unclear on that topic) and not carrying a cell phone. I won't be one of them.

There are more people testing themselves in the backcountry these days, leading to more and more tragedy on the slopes of Colorado's highest peaks. Former Vail resident Jason Blevins delved into the reasons behind the surge in mountain-climbing deaths on Colorado's high peaks this summer in an excellent article in Friday's Denver Post.

I've climbed close to half the state's 54 fourteeners, and I've done some dumb things in the backcountry, both in hiking boots and on skis. At 45 and wit three kids I've grown a lot more cautious, but I remember what it was like to push the envelope.

I am reminded of a couple of brothers from Missouri three years ago who got into real trouble on Holy Cross. That incident prompted the following blog post that I'm digging out of the archives and reposting here. In the meantime, I hope James Nelson is hunkered down somewhere with the best search and rescue crew in the nation -- Vail Mountain Rescue Group -- closing in on him Monday morning. Here's that old blog post: 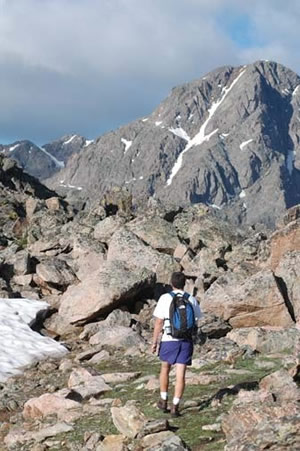 Climbing Notch Mountain with Mount of the Holy Cross in the background.
By Dan Davis
www.trekkerphoto.com

Oct. 24, 2007 — I refuse to castigate Jacob and Joshua Gately, two brothers from Missouri who made some very nearly fatal mistakes climbing Mount of the Holy Cross last weekend.

First of all, I can't stand the holier-than-thou superiority that spews from some backcountry enthusiasts, the ones that revel in every opportunity to point out other people's stupidity while obsessing over gear and preparation to the point that they remove all joy and spontaneity from outdoor sports.

You know the type. They think it's their god-given right to bark orders at strangers on the trail and save them from their own ignorance of all things woodsy. Personally, I love rolling the dice a bit, bushwhacking instead of sticking to the trail, doing some creative route finding and traveling faster, longer, harder and lighter than is perhaps prudent.

No, I wasn't bald and I didn't have a heavy Midwestern drawl. But I was young, foolish and felt myself to be virtually bulletproof. Time, responsibility and a small herd of children have all conspired to change my ways to some degree, but I can relate to Jacob's attitude on Holy Cross.

In fact, on Labor Day, 1993, I soloed Holy Cross. I was supposed to meet a friend that night in the Minturn ranger station parking lot but he wound up drinking the night away at State Bridge, so I threw on my pack and hiked up to Halfmoon Pass under a full moon.

I camped there that night then threw my full pack into the shrubs and headed up Holy Cross at 5 a.m. with only a daypack. I had been living in Vail a couple of years at that point and was outfitted a little better than Jacob (my tennis shoe days on fourteeners ended in my teens), but I would not have been prepared for an overnighter.

Granted, it was early September and not mid October, but all it would have taken for me to be forced to bivouac at 13,000 feet was a badly sprained ankle. Instead, I safely soloed up the summit and was the only person on the peak at 9 a.m. when a Forest Service employee summited using the Halo Route (he, too, was solo) and was quite surprised to see me.

But he made no judgment about my risky solo bid and seemed to understand the young male need to be tested by the elements. I was undoubtedly lucky, and I'm not advocating foolhardiness, but I am saying a certain amount of risk is a good thing in life.

However, it's fairly easy to mitigate some of those risks when hiking or climbing by always carrying a pack full of waterproof and warm clothing, extra food, water, a first-aid kit, dry matches, a map and compass. Similarly, don't head into the backcountry on skis without all the same stuff plus a shovel, beacon and probe (something I was also stupid enough to do when I was Jacob's age).

And it's also important to note that, unless you're Chris Davenport or Lou Dawson (renowned winter mountaineers who've skied all of the state's highest peaks), fourteener season is over, especially since a storm rolled into the Vail Valley Wednesday and promises to hang around through Thursday, with another one on the way Sunday.

1 Comment on "Solo hiking on Holy Cross without a cell phone ... not advisable but also not unprecedented "

I really don't understand why a cell phone should be required. 99% of the time, when you are out in the wilderness, there is no cell tower to get a signal from. And lets not mention that when you are out for more than a few days, there is no electrical outlet to charge your phone either. Let's be a little more logical and reasonable.