Book review: Diamond in the Desert

Everything looks the same, but not quite.

The trees are bigger, of course, but some are gone. Houses have been remodeled and painted, spiffed up or torn down and replaced. Lampposts still stand, but somehow they seem smaller than you remember. Things are different enough but even through grown-up eyes, you know you'd recognize your old neighborhood no matter how much it wasn't the same anymore.

Can you ever go home again? In the new book “Diamond in the Desert” by Jo Tatchell, idyllic childhood memories are replaced by blunt realities. 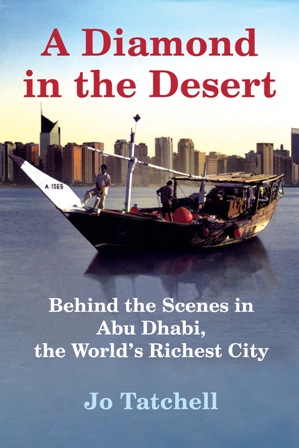 Back in the early 1970s, when she was just a toddler, Jo Tatchell's father accepted a position as manager of a British company's new Middle Eastern supermarket. He moved his family to the sleepy village of Abu Dhabi, where revenues were just beginning to flow like the oil from which they sprang.

The population of Abu Dhabi was about a thousand souls then and most of the villagers made their livings in the way their grandparents and great-grandparents did: as fishermen, camel traders, and pearl divers. Tatchell remembers picnics in ever-blowing sand dunes and waving to Abu Dhabians in their sanbuks on the water.

When she was a teenager, Tatchell's parents sent her back to Great Britain, and to school. She rarely returned to the sand, the souks, or the city in which she grew up.

So when her brother called her to tell her about a surprising cultural development being planned, Tatchell began to think about Abu Dhabi again. She hadn't visited since the millennium. She needed to see what had become of it.

She was dismayed at what she found.

Barasti huts made of palm fronds had been replaced by blinding-white skyscrapers. The once-ever-present sand that settled into every crease and cranny was miraculously absent. Even wooden sanbuks were replaced by yachts. Big money, designer fashions, and fancy vehicles had come to Abu Dhabi, along with a kind of cultural amnesia: many young Abu Dhabians are unaware that their lifestyles are vastly different than that which had been lived even two generations prior.

Without a doubt, “Diamond in the Desert” makes you want to go back about forty years in time to visit the Abu Dhabi of old. Author Jo Tatchell's wistful descriptions of the sands, the quiet way of life, even the pristine waters are so relaxing that you can almost hear voices in the souk and the call to prayer at ancient mosques.

But then the dirham flips, and Tatchell writes about a quickly-growing city in which possessions have new meaning but ancient tribal allegiances are strong and though foreigners are welcome, there is an underbelly. Tatchell weaves a bit of danger in this part-memoir, part-travelogue, part-cultural study which, despite that it delves into history that is sometimes a little hard to follow, makes it an alluring read.

If you're curious about Middle Eastern culture or if you want an inside peek at an oil-rich economy, you'll want this book. For you, “Diamond in the Desert” is definitely worth a look.

72 Comments on "Book review: Diamond in the Desert"

My review about the Diamond in the Desert book is that it is a sea of information. I love to read books on a daily basis. I always research for informative content to increase my knowledge. Those book writers who write an informative book are the best resource for us just like Terri Schlichenmeyer. The way he described the story of Abu Dhabi's development is superb. The lesson I learned from that book is that it is not mandatory that everything appears in front of us, we have to do research to make our country a real diamond. People pastly thought that Abu Dhabi is just a desert, not more than that. But they were wrong. Reality is in front of you all. They did research to make their desert country a diamond. Now Abu Dhabi is the best place for tourism, they have lots of resources and also it is the best place to live. Abu Dhabi is a role model for us and the motivation that everything is possible if we want.

High quality design, development and marketing packages designed by experts to meet the demands of businesses of all types and sizes. We create apps (Android, iOS, Windows) that are reliably consistent and engaging, keeping on-brand essence as a prime focus. Web Design & Development services USA

This book is adventurous and exciting throughout. a good read for everyone. Anyone should start this and they'll be so hooked on it. I finished this Book in a day

It’s not just a love story between Abdel and Leah but also serves as a story of self-discovery. With its beautiful writing, intriguing plot, and relatable characters, this book is definitely worth reading! io games wordle website

As a professional essay writer, My review of the Diamond in the Desert book is that it is lots of information. I am thankful to Terri Schlichenmeyer for writing this informative book that increases my knowledge. It will be better for tourists if he also writes about its places and resources. The Diamond in the Desert is a wonderful captivating true story about the life of a young brave woman from Scotland who fell in love with a Sheik from Abu Dhabi, moved to her Sheik's homeland, and gave birth to their children. It details how this strong Scottish woman helped build their home and family and became a key player in the development of her country as it grew into one of the most progressive countries on earth.

Good essay! Thanks for sharing . I find drift hunters to be a famous and attractive game.

I was searching for the about this book than I came here, It was really good to see the review of the book. It is written in a very friendly manner not all

I heard from my friend about your article, it was really helpful. I hope you continue to write more great articles. Thank you very much gartic phone ovo game

Sharing Tips : With online tools, you can easily find the top 100+ fonts. The wix logo maker tools didn't need registration and provided a free SVG vector file for future usage with no need to pay. Also, high-resolution PNG is free as well.

Chennai Escorts Agency experienced and professional escorts in Chennai. We have been providing quality companionship for years now. Our services are available 24/7 and our girls are highly trained professionals. They will make you feel like a king throughout the night.
Escorts Chennai

There are many gun cabinets to choice for for sale. They make wood gun cabinets and metal gun cabinets. They also make safes as well like pistol safes, wall safes, office safes, waterproof and handgun safes. FN 502

This is the best article and is very helpful to a lot of blog readers. . Keep it up!

Of course, your article is good enough, baccaratsite but I thought it would be much better to see professional photos and videos together. There are articles and photos on these topics on my homepage, so please visit and share your opinions.

Look at High Profile Independent Escorts in Surat and Enjoy Yourself

Are you are looking for High Profile Independent escorts in Surat, then you’ve come to the right place. On this website, we can assure you that you’ll get the escort girl of your dreams. High Profile Surat escorts are the perfect girls to provide you with an awesome experience. If you’re looking for a call girl to provide you with a journey of excitement and adventure, then you’re in the right place.
Beautiful escorts are first need of almost every gentleman. And if the girl is of your taste then it would be nothing better than this. Gentlemen always search for sexy and young escort for their entertainment. But there are very less chances that a man gets an escort of his taste. A girl who treat you like your girlfriend. A girl who can give you extreme happiness. There are lots of escorts in Surat but the chances of getting the right one is difficult. So that's why We are here to help you in getting your type of escort.

You’ll notice how fit and hot their bodies are the moment they come knocking at your door. You’ll never regret booking a Surat model escort especially if you’re prefer the physical attributes of a women to her physical traits. While most girls from other places appear and behave the same; No two escorts are the same. We have genuine escorts from different family backgrounds. They are from rich class, middle class, and poor class families. If you’re simply looking for a down-to-earth simple girl that can understand your needs, then these call girls are perfect for you. If you’re looking for a call girl that will go clubbing and drinking with you, then I’ve also got you covered. We have top level escorts that are businesspersons, investors, high ranked investors, lawyers and doctors.

crop svg online - Remove blank space from around any SVG

It's not just about Abdel and Leah's romance; it's also about finding oneself. This book is absolutely worth reading because of its excellent writing, captivating plot, and likeable characters. website with world games environmental consultant

Are you looking for a professional to build a dock, repair one, or install one? Tampa Dock Builders is the company to contact today. Tampadockbuilder.com

If you believe there may be mold lurking in your home, contact us for a free consultation right away.

I am sure this post has touched all the internet users, its really really pleasant piece of writing on building up new webpage.
https://www.safetotosite.pro/
https://casinositenet.com/
https://www.casinositekim.com/

Diamond in the Desert is a popular book included in my Wordle collection. I have read this book so many times and still want to read it again every time I have free time.

This was an extremely good post. Taking the time and actual effort to produce a top notch article… but i want to recommend a good and trusted 스포츠토토존온라인카지노카지노사이트킹

Good Job! Appreciating the hard work you put into your site and detailed information you present.
카지노사이트 ~

It’s really great. Thank you for providing a quality article. It was pleasure to read it. 사설토토 ~

Great Post .Thanks for this valuable Information.Project Financial Management Software

Bangalore Escorts are one of the most reliable escort agencies in town.

Chennai Escorts will arrange for everything, right getting in touch, to contacting and supplying, and arranging for the hotels, and other facilities. Our Escort In Bangalore girls are available in every location in and around Bangalore. You can consider the options wisely and give us a call to place your requirements. Accordingly, Escorts Bangalore agency representatives will contact you and make the necessary arrangements.