The view from the foot of the mountain 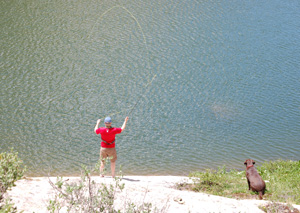 Evidence that my mountain lifestyle is not gone, nor forgotten: me and Bode at a top-secret high mountain lake over Fourth of July, 2010.
Photo by Renee Boyd

It kinda pains me to admit it.

Once upon a time I was a full-time local. In fact, I was the local-est of the locals – a lifer, an honest-to-goodness “yeah I grew up here” local, born at Rose General Memorial in a time before Vail delivered babies, then trained early in the fine art of harassing tourists as a youth, buzzing around on 205 K2 extremes in winter, blitzing through Crossroads hucking whipper-snappers at adults in summer, frequenting the Vail Burger King between sessions at Bob Johnson's hockey camp each August, and generally making the most of life in a resort town.

After college it was back to the nest – or in my case, the Club, where I became a fixture around the foosball table in the evenings, and a cub reporter at the now-defunct Vail Trail (Vail's first newspaper) in the daytimes. It's then that I rediscovered skiing through telemarking, began writing outdoors and travel for the Rocky Mountain News (another defunct paper) and other magazines and newspapers around the west.

A lot of old locals in their 30s will tell you they moved out of Vail because they couldn't afford it, or there wasn't any work.

I can't talk about life in Vail without mentioning all the publications I've worked for that are now out of print, out of business, out of money and out of the market.

It became clear, sometime in the early 2000s, that if I was going to forge any kind of redeemable life for myself – and still be able to live in the mountains – I was going to have to make my own way, hunker down, and build my own business. In 2007 I gathered together with a few other people in my situation and began investigating online publishing. After several years of hard work, blood sweat, tears, and a whole lot of education, here we are in 2010 with what we think is the right solution for independent, online publishing.

I couldn't do it and stay full-time in Vail.

Fortunately, I'm one of the lucky ones with lots and lots of family in the mountains. My wife and I split time between our Denver house and the family compound in West Vail, and on a shoe-string budget and a lot of miles on I-70, I've managed to visit Vail, Aspen, Summit County, Winter Park, Telluride, Steamboat … you get the picture.

So that's what this space will be dedicated to: making the most of the mountains from a Front Range perspective. Bit by bit, word by word, event by event and photo by photo, I'll be building a picture of what my old stomping grounds look like from the foot of the mountain. It may seem like city life is city life – and mountain life another thing entire – but now that I've lived here a while, the state of Colorado looks a whole lot smaller.

Even now I'm fresh off another day of fishing on the river. I've backpacked, hunted, and fished as much as I ever did living in Vail – and although I've missed a powder day or two, I still get up enough to keep the tele legs bump-ready (well… barely).

In the past three years I've learned something important, too: people down here on the Front Range – people like me – we feel just as much a part of the resort towns as anybody else. When it comes right down to it, we Front Rangers feel like the mountains are just one big back yard. We ain't riff-raff, and we're sure as hell not tourists. We feel like locals.

And you know what? A lot of us actually are (or were at some point). As for me, I'll always be a Vail local no matter where it is I happen to be.

There's enough in the mountains to go ‘round … so hopefully you lucky full-timers won't mind sharing a bit with us weekend warriors from time to time.

0 Comments on "The view from the foot of the mountain"