Every mid-winter break our family is divided: city trip or ski trip to another mountain resort?

Last week we decided to do both. On the Sunday before President's Day I took our three boys down from our home in Vail to Denver for a concentrated dose of citified culture and then later in the week we headed to Crested Butte to chill out in an off-the-grid ski town far from the I-70 corridor (more on that leg of the trip in a future blog). First the city trip.

We do several Denver trips a year and used to be obsessed with staying downtown, especially during baseball season. We have our favorite hotels in the downtown core, most of them walking or short shuttle distance to great restaurants and plenty of things to do with the kids (including Coors Field and the Denver Art Museum). 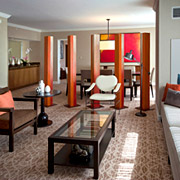 Lately we've been staying in Cherry Creek because it's a little quieter and more central for trips to the Denver Museum of Nature and Science and the Denver Zoo at City Park. Our favorite hotel in Cherry Creek is the JW Marriott.

Fairly recently remodeled, the JW is a beautiful property with 191 incredibly comfortable, contemporary guest rooms, wall-to-wall wifi (for the inevitable work issues that crop up, even on break) and two concierge levels that offer the ability to grab a quick snack, glass of wine or brief escape from a guest room crowded with kids.

But my absolute favorite thing about the JW is its location between First and Second on Clayton Street. You're literally steps from the high-end Cherry Creek Mall, where the boys and I last week caught a 3D screening of “Hugo” at the AMC Theaters – right before it won five Oscars.

We don't have a mall in Vail, so that concept in and of itself is a bit of a novelty for three kids raised in the hills (although hardly the hinterlands). And if a movie like Hugo plays at our local theaters in Vail or Edwards, it does so only briefly.

Also kid-friendly and within walking distance are favorites like the new candy emporium extraordinaire, Sugarlicious; Denver's best toy store, the Wizard's Chest; and a great lunch spot for the whole family, the Cherry Creek Grill. My wife and I also like to walk up to a 6th Avenue Denver dining landmark, the Barolo Grill, for an intimate Italian dinner sans kids. 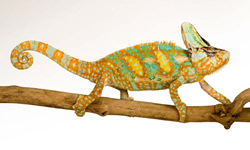 A veiled chameleon at the Denver Museum of Nature and Science.

Finally, staying at the JW Marriott in Cherry Creek means you're a very short jaunt basically straight north up Colorado Boulevard to City Park, home to the Denver Museum of Nature and Science.

We spent the better part of President's Day there, first checking out the new Lizards and Snakes exhibit (turns out boys love live pythons and monitor lizards) and then doing the relatively affordable (for annual members) doubleheader of a Gates Planetarium show – we saw “Wildest Weather” – and an IMAX show. Continuing the creepy crawly theme, we took in “Flying Monsters 3D,” about the rise and fall of flying dinosaurs.

Good stuff for boys of all ages.

No doubt this is an excellent post I got a lot of knowledge after reading good luck. Theme of blog is excellent there is almost everything to read, Brilliant post. digital blood pressure monitor

Thanks for the blog loaded with so many information. Stopping by your blog helped me to get what I was looking for. IGÉNYLÉS INDIAI VÍZUMOT

You have outdone yourself this time. It is probably the best, most short step by step guide that I have ever seen. Туристически пътеводител за Квебек

Wow! Such an amazing and helpful post this is. I really really love it. It's so good and so awesome. I am just amazed. I hope that you continue to do your work like this in the future also Yêu cầu về thị thực Thổ Nhĩ Kỳ

If you set out to make me think today; mission accomplished! I really like your writing style and how you express your ideas. Thank you. Visto di emergenza urgente per gli Stati Uniti

When your website or blog goes live for the first time, it is exciting. That is until you realize no one but you and your. Indian Visa for Finland Citizens

I wanted to thank you for this excellent read!! I definitely loved every little bit of it. I have you bookmarked your site to check out the new stuff you post. türkiye vize reddi nasıl önlenir

I really appreciate this wonderful post that you have provided for us. I assure this would be beneficial for most of the people. HİNDİSTAN VİZESİ PASAPORT ŞARTLARI

Your articles are inventive. I am looking forward to reading the plethora of articles that you have linked here. Thumbs up! SOLICITUD DE VISA AMÉRICA EN LÍNEA

Great survey, I'm sure you're getting a great response. トルコビザ申請オンライン

Best work you have done, this online website is cool with great facts and looks. I have stopped at this blog after viewing the excellent content. I will be back for more qualitative work. Indien Business Visa

This content is written very well. Your use of formatting when making your points makes your observations very clear and easy to understand. Thank you. INDIJOS VIZOS PRAŠYMO FORMA

Everything has its value. Thanks for sharing this informative information with us. GOOD works! VISA PERUBATAN UNTUK INDIA

I found this is an informative and interesting post so i think so it is very useful and knowledgeable. I would like to thank you for the efforts you have made in writing this article. applicazione eta canada