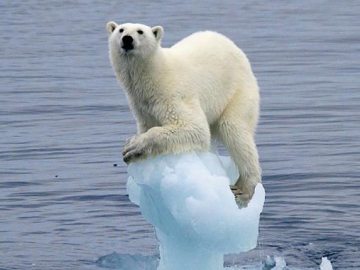 “The school brought in this company to push liberalism and radical environmentalism,” wrote Paul Gallagher, a Gypsum resident whose niece attends Eagle Valley High School. “My sister and I sat through this almost one-hour of garbage and heard the presentation about ‘climate change,' a lack of snow in Colorado due to global warming, ‘glaciers melting,' ‘polar bears' disappearing, how cow ‘flatulence' contributes to the problem, how we all should ‘walk or bike somewhere if less than five miles away,' buy ‘local farmers markets' produce, the importance of ‘recycling,' ‘doomsday' is approaching without taking action, etc. It was very concerning.”

A record December drought in Colorado's high country underscored evidence of increasing warming in the Rocky Mountain West – a situation that has led to a widespread mountain pine bark beetle epidemic and mounting susceptibility to massive wildfires. It also took a toll on the state's ski industry earlier this season.

“Climate science denial has been a really hot topic recently and we've faced our fair share of skeptics when trying to book presentations and during their delivery,” acknowledged Kara Muraki, program manager for Alliance for Climate Education. “The science behind our presentation is based entirely on the IPCC [Intergovernmental Panel on Climate Change] report, and we believe that if students have the opportunity to learn the conclusions of 98 percent of the world's leading climate scientists – no matter what else they hear -- it will help to reverse the recent increase in public skepticism about global warming.”

Based on his email, Gallagher won't be helping to reverse the trend any time soon:

“At the end of the assembly, kids were asked to come onstage if they had an interest in starting a ‘climate change' group at their school,” he wrote. “I would say two-thirds of the kids went onstage. Not good. I would say brainwashing, scare tactics, lies and peer pressure made them feel obligated to get involved onstage.”

Even the U.S. Department of Defense is preparing for significant military interventions resulting from climate change, including “violent storms, drought, mass migration and pandemics.”

Hey what a brilliant post I have come across and believe me I have been searching out for this similar kind of post for past a week and hardly came across this. Thank you very much and will look for more postings from you. reddit uk musictamburrogamerevolution

Wow i can say that this is another great article as expected of this blog.Bookmarked this site.. Beast headphone

This is such a great resource that you are providing and you give it away for free. I love seeing blog that understand the value of providing a quality resource for free. prosus russia 6bprinsloobloomberg

I am very much pleased with the contents you have mentioned. I wanted to thank you for this great article. microfiber cleaning cloth

Thank you because you have been willing to share information with us. we will always appreciate all you have done here because I know you are very concerned with our. magazine module

Wow! Such an amazing and helpful post this is. I really really love it. It's so good and so awesome. I am just amazed. I hope that you continue to do your work like this in the future also 24 news master

Thanks for a very interesting blog. What else may I get that kind of info written in such a perfect approach? I’ve a undertaking that I am simply now operating on, and I have been at the look out for such info. tech web post

I definitely enjoying every little bit of it. It is a great website and nice share. I want to thank you. Good job! You guys do a great blog, and have some great contents. Keep up the good work. pro tech terms

That is really nice to hear. thank you for the update and good luck. the diabs

Hey what a brilliant post I have come across and believe me I have been searching out for this similar kind of post for past a week and hardly came across this. Thank you very much and will look for more postings from you. site here

It was wondering if I could use this write-up on my other website, I will link it back to your website though.Great Thanks. sisal fiber

Positive site, where did u come up with the information on this posting? I'm pleased I discovered it though, ill be checking back soon to find out what additional posts you include. how to sell credit card processing

I have a hard time describing my thoughts on content, but I really felt I should here.  virtual assist pro Your article is really great. I like the way you wrote this information. https://www.digitalmonkmarketing.com/seo This is very interesting content! I have thoroughly enjoyed reading your points and have come to the conclusion that you are right about many of them. You are great.

Fantastic blog! Do you have any tips and hints for aspiring writers? calgary food I’m planning to start my own website soon but I’m a little lost on everything. Would you propose starting with a free platform like WordPress or go for a paid option? There are so many options out there that I’m completely overwhelmed .. Any suggestions? Many thanks! https://www.butterfieldacres.com/

Took me time to read all the comments, but I really enjoyed the article. psychologist edmonton It proved to be Very helpful to me and I am sure to all the commenters here!  chiropractic clinic calgary It’s always nice when you can not only be informed, but also entertained!This is my first time i visit here and I found so many interesting stuff in your blog especially it's discussion, thank you.signal hill dental centre

I haven’t any word to appreciate this post.....Really i am impressed from this post.... bottle recycling near me the person who create this post it was a great human..thanks for shared this with us. tire shops calgary Thanks for taking the time to discuss this, I feel strongly about it and love learning more on this topic. If possible, as you gain expertise, recycling depots near me would you mind updating your blog with extra information? It is extremely helpful for me.

I would like to show my thanks to you just for bailing me out of this problem. cochrane nail salons Right after researching through the world wide web and seeing strategies which are not helpful, country hills I figured my entire life was gone. Existing minus the approaches to the issues you’ve fixed through your main guideline is a crucial case, jazz dance and ones that would have in a negative way damaged my entire career if I hadn’t discovered your website. Your primary ability and kindness in playing with all things was precious.

Definitely believe that which you stated. math tutoring calgary Your favorite reason appeared to be on the internet the easiest thing to be aware of. I say to you, I certainly get annoyed while people think about worries math tutor country hills that they plainly don’t know about. high school math tutor You managed to hit the nail upon the top as well as defined out the whole thing without having side-effects , people could take a signal. Will likely be back to get more. math tutor killarney Thanks

I truly appreciate this post. I have been looking all over for this! mathnasium near me Thank goodness I found it on Bing. math 30 1 tutor calgaryYou have made my day! Thanks again tutors victoria bc

I have been exploring for a bit for any high quality articles or blog posts in this sort of house . Exploring in Yahoo I finally stumbled upon this website. Reading this info  https://medserg.com/ So i am glad to exhibit that I’ve a very good uncanny feeling I came upon just what I needed. I such a lot no doubt will make sure to do not disregard this web site and provides it a glance regularly.