Vail's Vonn vamps for Italian mag, jets back for Letterman 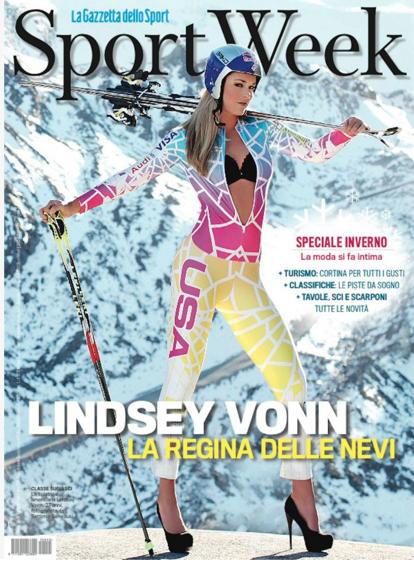 Unless you count winning five ski races (four in a row at one point), winning for the first time on home snow on a men's course at Beaver Creek, tying for third on the all-times wins list, going into divorce proceedings with her husband of four years, or being linked (the rumor mill says romantically; she says just friends) with the hottest quarterback in the NFL in Denver's Tim Tebow.

What could possibly add a little more spice to all of that for the former Ski and Snowboard Club Vail racer and Olympic downhill gold medalist?

How about an appearance on Late Night with David Letterman? Vonn flew back from Europe to appear on the show Thursday night, but mostly just talked about, well, ski racing.

Dave didn't talk Tebow at all. Nor did he bring up a racy new photo spread of Vonn in the Italian magazine Sport Week.

Vonn posted the photos on her facebook page Wednesday and they quickly went viral.

Reminiscent of her sexy Sports Illustrated cover and photo spread right before the Vancouver Winter Olympics in 2010 or her Sharon Stone impersonation for ESPN the Magazine, the Sport Week spread, entitled “La Regina Delle Nevi,” or “The Queen of the Snow,” is sure to inject even more sizzle into what's already been a smoking-hot season for America's best ski racer.

5 Comments on "Vail's Vonn vamps for Italian mag, jets back for Letterman"

I think this is a standout amongst the most critical data for me. What"s more, i"m happy perusing your article. Be that as it may, ought to comment on some broad things Aluminium ramen