CNBC Monday reported on recordings made by an Earthworks activist at a Houston oil and gas industry confab last week. The tapes reveal that companies use psyops techniques and even former military personnel to break the “insurgency” of community activism opposing domestic drilling.

“We have several former psyops folks that work for us at Range because they're very comfortable in dealing with localized issues and local governments,” Range Resources communications director Matt Pitzarella said on tape. “Really, all they do is spend most of their time helping folks develop local ordinances and things like that. But very much having that understanding of psyops in the Army and in the Middle East has applied very helpfully here for us in Pennsylvania.” 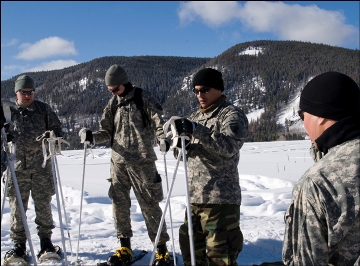 In another session, Matt Carmichael, manager of external affairs for Anadarko Petroleum, made similar recommendations.

“Download the U.S. Army-slash-Marine Corps Counterinsurgency Manual, because we are dealing with an insurgency,” Carmichael said. “There's a lot of good lessons in there and coming from a military background, I found the insight in that extremely remarkable.”

What are psyops techniques and troopers and how does the military use them? Think strongman Manuel Noriega in Panama being blasted incessantly by Van Halen and Howard Stern until he finally surrendered to U.S. troops in 1990. Or leaflet drops over villages in Iraq and Afghanistan.

In Colorado, the U.S. Army's airborne 324th Psychological Operations Company is based out of the Buckley Air National Guard base in Aurora. The unit regularly conducts winter warfare training in the mountains near Vail – clearly for future deployment to the mountains of Afghanistan.

In 2003, a psyops trooper heading into Camp Hale – a former 10th Mountain Division and CIA training ground between Vail and Leadville – told the website Real Vail that psyops are all about marketing (with a gun): “We provide information, that's basically what we are, In a layman's sense, we do marketing. We try to sell democracy and the concept of how it works.”

In that same article, a professor who studies psyops techniques had this to say: “It's all bullshit,” said Donald Goldstein, a professor of public and international affairs at the University of Pittsburgh. “Warfare has changed to the point that instead of just killing people, you have to understand them first.”

The link between modern warfare and domestic energy production seems particularly topical given the Republican push for more drilling on federal lands and in American suburbia to improve security abroad.

GOP presidential candidate Herman Cain recently said he's a “Koch brothers' brother from another mother,” referring to Koch Industries' David and Charles Koch – the energy and chemical industry giants pumping millions into conservative candidates and the tea party movement. In Beaver Creek, Colo., this summer, Charles Koch said the campaign to unseat President Barack Obama and his pro-environment policies would be “the mother of all wars.”