One of the themes that emerged from last week's Republican presidential debate in Nevada – the foreclosure capital of the United States – is that GOP candidates largely don't think the federal government should do much to fix the ongoing housing crisis.

Instead, candidates – if they've said anything at all about housing – feel the real estate market should be allowed to hit rock bottom while the broader economy is stimulated by programs aimed at job growth – especially in energy sectors like oil and gas development and coal mining.

“The idea of the federal government running around and saying, ‘We're going to give you some money for trading in your old car…or we're going to keep banks from foreclosing if you can't make your payments...” candidate and former Massachusetts Gov. Mitt Romney said, “The right course is to let markets work.”

“Mitt Romney's message to Nevada homeowners struggling to pay their mortgage bills is simple: You're on your own, so step aside,” Obama campaign spokesman Ben LaBolt said. “This is just one more indication that while he will bend over backwards to preserve tax breaks for large corporations and tax cuts for millionaires and billionaires, Mitt Romney won't lift a finger to restore economic security for the middle class.” 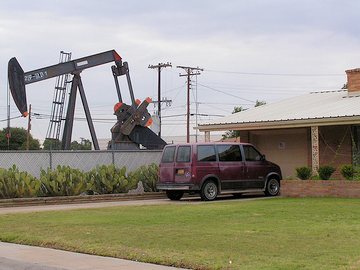 Texas Gov. Rick Perry wouldn't even touch the foreclosure issue last week, but he has been one of the most strident supporters of rolling back environmental regulations to stimulate domestic energy production and add those high-playing (albeit boom and bust) jobs.

And that approach jibes with Colorado's Republican congressional delegation, with freshmen like Scott Tipton and Cory Gardner talking a lot about domestic energy production but not so much about the housing crisis in Colorado – still among the nation's leaders in foreclosures. Tipton is increasingly on the hot seat for being one of the most ardent supporters of tax subsidies for big oil and gas.

But as hydraulic fracturing has opened up unconventional oil plays in formations like the Niobrara Shale in northern Colorado, places like Weld County are still experiencing high foreclosure rates. And the ensuing land rush and oil and gas leasing frenzy has left some property owners confused and fearful. Perhaps rightfully so.

Banks in New York are now becoming more proactive, in some cases declining to loan money to purchase property unless the buyer agrees not to allow drilling or the oil and gas company agrees to clean up any environmental messes that might lower property values.

“Bankers and real estate executives, especially in New York, are starting to pay closer attention to the fine print and are raising provocative questions, such as: What happens if they lend money for a piece of land that ends up storing the equivalent of an Olympic-size swimming pool filled with toxic wastewater from drilling?” the New York Times reported last week.

Property owners in Colorado have already experienced precipitous declines in property values as a result of drilling activity, the non-profit Checks and Balances Project reports:

“In recent years, landowners in heavily ‘fracked' parts of the country, like Garfield County Colorado, have seen property values plummet. Retirees, like Dee Hoffmeister and Lisa Bracken, have experienced this firsthand. Both of their families have found themselves powerless to pursue any recourse at recovering the damage done to their personal assets.”

So the seemingly unrelated housing crisis and economic recovery via more domestic drilling and mining may actually be mutually exclusive in some areas.

It’s appropriate time to make some plans for the future and it is time to be happy. I have read this post and if I could I wish to suggest you few interesting things or advice. Perhaps you could write next articles referring to this article. I desire to read even more things about it! 123movies.com

Thanks for another excellent post. Where else could anybody get that type of info in such an ideal way of writing? In my opinion, my seeking has ended now. 마진거래

Your content is nothing short of brilliant in many ways. I think this is engaging and eye-opening material. Thank you so much for caring about your content and your readers. fx사이트

This is my first time visit here. From the tons of comments on your articles,I guess I am not only one having all the enjoyment right here! 파워볼전용사이트

I definitely enjoying every little bit of it. It is a great website and nice share. I want to thank you. Good job! You guys do a great blog, and have some great contents. Keep up the good work. how to become a payment service provider

This is very interesting content! I have thoroughly enjoyed reading your points and have come to the conclusion that you are right about many of them. You are great. How to start a credit card processing company

I read your blog frequently, and I just thought I’d say keep up the fantastic work! It is one of the most outstanding blogs in my opinion. elling credit card terminals

I’m going to read this. I’ll be sure to come back. thanks for sharing. and also This article gives the light in which we can observe the reality. this is very nice one and gives indepth information. thanks for this nice article... 홀덤사이트

Excellent post. I was always checking this blog, and I’m impressed! Extremely useful info specially the last part, I care for such information a lot. I was exploring this particular info for a long time. Thanks to this blog my exploration has ended. baccarat

Thanks for another wonderful post. Where else could anybody get that type of info in such an ideal way of writing? canadian online casino

I'm glad I found this web site, I couldn't find any knowledge on this matter prior to.Also operate a site and if you are ever interested in doing some visitor writing for me if possible feel free to let me know, im always look for people to check out my web site. best online casino canada

I think this is an informative post and it is very beneficial and knowledgeable. Therefore, I would like to thank you for the endeavors that you have made in writing this article. All the content is absolutely well-researched. Thanks... polskie kasyno online

Positive site, where did u come up with the information on this posting?I have read a few of the articles on your website now, and I really like your style. Thanks a million and please keep up the effective work. online casino

Your content is nothing short of brilliant in many ways. I think this is engaging and eye-opening material. Thank you so much for caring about your content and your readers. casinos online

Remarkable article, it is particularly useful! I quietly began in this, and I'm becoming more acquainted with it better! Delights, keep doing more and extra impressive! raspadinhas online

Pretty good post. I have just stumbled upon your blog and enjoyed reading your blog posts very much. I am looking for new posts to get more precious info. Big thanks for the useful info. web page

Thank you very much for this useful article. I like it.Watch anime online free

Nature of Gambling: Slots are appealing because they can be both relaxing and exciting at the same time; hypnotizing yet stimulating. The drone of the reels, even though artificial at this point, can keep you quite calm as you try and press your luck. If the RNG favors you then you can win big bucks. If it doesn't then it's a waste of money but that's just the nature of gambling. You're in good shape if you win more than you lose; just like with life Click here: Joker123

Special Features and Symbols: A typical game will have scatters, wilds, and multipliers included. For an aquatic game, you might end up with a scatter that's a gold coin from a sunken ship and the wild might be a shark that eats all the other symbols aside from the coin. Wilds serve as substitutes for other symbols in case you're about to complete a combo. Scatters serve as the bonus giver, like the question mark box in Super Mario Bros. from the NES. Joker123 | Situs Joker | Joker Gaming | Sv388 | Agen Slot Joker | Daftar Joker123 | Slot Joker Gaming | Agen Joker

Multiply Your Fortune: Multipliers might come in the form of bonuses you get from scatters, wilds, or from which payline your combo lands on. For example, if you get a wild and complete a combo with it instead of using it to complete combos, you can get a 10,000x multiplier out of your stake when you get five wilds on an active payline. Also you can get 10 bonus spins when scatters land on the 3rd 4th, or 5th reel. Fafaslot | Joker Gaming Slot | Vivoslot | Fafaslot | Joker123 | Joker Gaming | Slot Joker Gaming | Daftar Fafaslot

Excellent post. I was always checking this blog, and I’m impressed! Extremely useful info specially the last part, I care for such information a lot. I was exploring this particular info for a long time. Thanks to this blog my exploration has ended. outlook 365

I really loved reading your blog. It was very well authored and easy to understand. Unlike other blogs I have read which are really not that good.Thanks alot! 토토사이트

Very informative post! There is a lot of information here that can help any business get started with a successful social networking campaign. metal push button switch

You have performed a great job on this article. It’s very precise and highly qualitative. You have even managed to make it readable and easy to read. You have some real writing talent. Thank you so much. Farmhouse near chennai

Thanks for sharing such an Amazing information, I Couldn’t leave without reading your blog.
I appreciate your quality stuff, that was really so useful and informative blog! ทางเข้าเล่น pg slot

page and would like you to keep updated on news. And upload current articles for us to read continuously For thorough tracking pg slot

Nice bLog! its interesting. thank you for sharing.
soap2day

Hi there, great post! I couldn't help but notice that your comment section is spammed endlessly.
If you need any help with clearing it up, or any other help with IT let me know.
I'll leave a link to my website, fell free to reach out. EB Solution

We also provide VoIP, Cybersecurity, and Managed IT Support.

Have a great day,
Artem