The expected loss of seat capacity at Eagle County Regional Airport for inbound flights this winter has been revised to 4.3 percent, after increased service to Miami and Denver were counted in official estimates.

As recently as Friday, after Delta Air Lines eliminated its daily Minneapolis route and Saturday non-stop trips from Cincinnati and Detroit to Eagle County, officials feared the loss of seat capacity would be 10 percent. But after flight schedules were uploaded over the weekend the percentage improved.

“We were subtracting the Delta service, but we weren't adding in the increases,” Vail Mountain COO Chris Jarnot explained Monday night. “We can now confirm American Airlines is increasing its Miami service from four to five and United Airlines increased some of its service from Denver to Eagle too.” 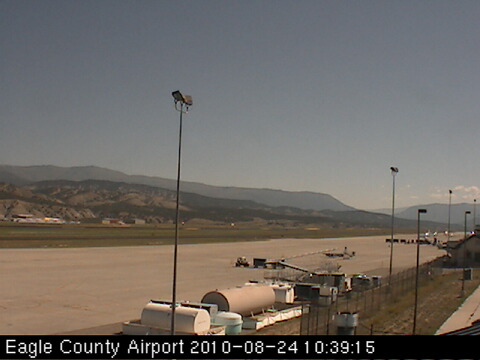 Check out the airport's live web cam!
Vail Resorts is intricately connected to the Eagle County Regional Airport. The company coordinates flights for the airport in the winter and is the primary marketer for that season's air program. The company is also contractually bound with the airlines to guarantee that certain flights will generate a targeted amount of revenue and if projections fall short, Vail Resorts cuts the airlines a check.

One of those guaranteed flights was Delta's daily Minneapolis route, which Jarnot said lost money last year and therefore won't be returning. The flight had existed a long time — since at least the 1990s. The flight was daily in the peak season and operated five days a week during slower times of the year.

What hurt the flight, he said, is that in May 2009 the discount airline Southwest launched a Denver to Minneapolis route to compete with United, Delta and Skywest, which also service Minneapolis. There are now 20 flights a day between Denver and Minneapolis, forcing down prices and hurting Eagle.

“The reason the Minneapolis service is going away is not enough people flew on it last year. The reason so many people didn't fly on it is because they had better options through Denver,” Jarnot said. “If you are a skier in Minneapolis and you have your choice between one flight to Eagle or four airlines competing for your business with 20 flights to Denver, you're going to prefer the latter I'm pretty sure.”

Even though Delta is dropping its flights from Minneapolis, Cincinnati and Detroit, the airline isn't pulling out of Eagle County Regional Airport altogether. It will still operate a daily flight to Atlanta. 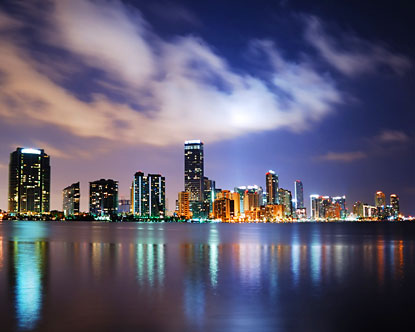 A picturesque view of Miami.

Helping offset the Delta losses is American Airlines increased service from Miami. That route is going from four to five this winter in large part thanks to Latin American skiers who make connections through the Miami airport. Vail Resorts is seeing more traffic from Argentina, Brazil and Venezuela, according to Jarnot, and the Miami flights to Eagle are accommodating the South American demand. Jarnot added that the success of the flight is also helped by its growing popularity with Floridians.

Bill Tomcich, president of Stay Aspen Snowmass, pointed out to Real Vail the Eagle airport's lost non-stops to Minneapolis, Cincinnati and Detroit last week, as well as the increased service to Miami, but Eagle County and Vail Resorts officials at that point could not confirm the increased service to Miami. Tomcich began more closely analyzing winter schedules at Eagle — which is frequented in part by Roaring Fork Valley travelers — when there was concern Frontier was pulling out of the Aspen airport. Frontier, however, reversed course and elected to continue winter service to Aspen at the eleventh hour.

Now both the Aspen and Eagle airports are in better position for this upcoming ski season than previously thought. The Eagle airport will only have 4.3 percent fewer inbound seats from last winter, and Aspen's airport should have about the same seat capacity as last season, which was the strongest in seat capacity and enplanements in 12 years. In addition to Frontier staying in Aspen, United is ratcheting up its flights there from Chicago and San Francisco.

This is my first time visit here. From the tons of comments on your articles,I guess I am not only one having all the enjoyment right here! movies123

The best article I came across a number of years, write something about it on this page. http://wowufatip.com/

This is such a great resource that you are providing and you give it away for free. I love seeing blog that understand the value of providing a quality resource for free. buy weed online us

I have read your blog it is very helpful for me. I want to say thanks to you. I have bookmark your site for future updates. how to buy fentanyl

I found so many interesting stuff in your blog especially its discussion. From the tons of comments on your articles, I guess I am not the only one having all the enjoyment here! keep up the good work... domino99 online asia

This is a truly good site post. Not too many people would actually, the way you just did. I am really impressed that there is so much information about this subject that have been uncovered and you’ve done your best, with so much class. If wanted to know more about green smoke reviews, than by all means come in and check our stuff. black owned business directory

i am always looking for some free stuffs over the internet. there are also some companies which gives free samples. visit this page

I was reading your article and wondered if you had considered creating an ebook on this subject. Your writing would sell it fast. You have a lot of writing talent. check this website

I like to recommend exclusively fine plus efficient information and facts, hence notice it: 토토사이트

I wrote about a similar issue, I give you the link to my site. 바둑이

I invite you to the page where you can read with interesting information on similar topics. 룰루바둑이

I really appreciate this wonderful post that you have provided for us. I assure this would be beneficial for most of the people. 토토사이트

I came onto your blog while focusing just slightly submits. Nice strategy for next, I will be bookmarking at once seize your complete rises... 릴게임

Nice information, valuable and excellent design, as share good stuff with good ideas and concepts, lots of great information and inspiration, both of which I need, thanks to offer such a helpful information here. 릴게임사이트

I invite you to the page where you can read with interesting information on similar topics. 먹튀검증

Here you will learn what is important, it gives you a link to an interesting web page: 먹튀검증

I am interested in such topics so I will address page where it is cool described. 꽁머니

I can recommend primarily decent and even responsible tips, as a result view it: 스포츠티비

Very good topic, similar texts are I do not know if they are as good as your work out. 먹튀폴리스

This is very interesting content! I have thoroughly enjoyed reading your points and have come to the conclusion that you are right about many of them. You are great. 토토사이트

These you will then see the most important thing, the application provides you a website a powerful important internet page: 릴게임

Awesome dispatch! I am indeed getting apt to over this info, is truly neighborly my buddy. Likewise fantastic blog here among many of the costly info you acquire. Reserve up the beneficial process you are doing here. 안전놀이터

It's superior, however , check out material at the street address. 꽁머니

Your home is probably your biggest investment. By maintaining its cleanliness, you are also protecting your asset. Imagine if you have no time for house cleaning and you are worried that hiring house cleaners is only an extravagance. end of lease cleaning

The check list below will navigate you through the maze of options to get you the right online training. Patente

Certification as a specialist signals that the lawyer has achieved a higher standard of experience in his/her area but certification isn't mandatory. lawyer for company registration

Great post i must say and thanks for the information. Education is definitely a sticky subject. However, is still among the leading topics of our time. I appreciate your post and look forward to more. one cheap flights

There are various platforms where you can list your car for sale, such as online marketplaces, classified ads websites, or social media platforms. It's important to choose the right platform that fits your target market and audience. car history