RealAspen News and Community Content Feed
By David O. Williams
Real Aspen – September 6, 2011
Doug Vilsack knows that finding third-world poverty and a lack of connectivity to the electrical grid in modern America might be about as shocking to some people as finding elephants wandering the Navajo Nation in the Four Corners region of Colorado, New Mexico, Arizona and Utah.

So when Vilsack's Denver-based sustainable energy non-profit Elephant Energy researched the situation on the Navajo Nation last year, discovering dangerous kerosene lanterns and heaters and more than 18,000 households completely off the grid, they changed their name to Eagle Energy in the Four Corners area.

Originally founded to provide similar products in Namibia, Eagle Energy is now working hard to deliver solar light bulbs from Denver-based Nokero [No Kerosene] and other sustainable energy products to the Navajo Nation – all the while hoping to stimulate the small-scale entrepreneurial companies offering such services. 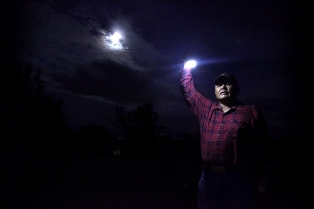 “Yeah, many Navajo people are still using kerosene,” said Vilsack, a Colorado College and University of Colorado graduate whose father is Agriculture Secretary Tom Vilsack. “Most people still don't have heating. They're using wood for energy. There's just a huge need for even these really small-scale technologies to get rid of this kerosene problem on the Navajo Nation.

“It's a stunning thing to be happening here in our own country.”

Vilsack formed Elephant Energy three years ago to improve the quality of life in Namibia, where only about 15 percent of the rural population is connected to the electrical grid. Kerosene is a potentially toxic fuel source that presents numerous health problems, including the very real risk of household fires. An attorney, Vilsack was doing some work on the Navajo Nation when he noticed similar conditions there.

He said there are several barriers to connecting the estimated one-third of the Navajo Nation households that are off the grid – most of them having to do with expense and geography – but he adds that alternative energy products may hold the best hope for short-term relief.

“There should be a lot of money put into larger scale [solar] systems on people's houses down there, but you have to start somewhere, and if it's with a $5 or $10 solar-powered light bulb, you can accomplish a heck of a lot with that,” Vilsack said. “With one of these bulbs at least you can go a long way toward removing the need for people to go buy kerosene at Wal-Mart.”

Adella Begaye, a Navajo Nation nurse, said she started working as an interpreter for the Indian Health Service when she was a teenager in the 1970s. Back then, she said it was very rare to see patients with asthma or other respiratory diseases. Now it's common.

Begaye, also a community advocate with Diné CARE, points to the large coal-fired power plants built in the region in the 1960s and 70s. She sees the irony in so many people living so close to huge power plants but completely off the grid.

“I know the statistics are pretty high,” Begaye said of the lack of connectivity, “and the sad thing is there's a lot of people that live right in the vicinity of these big power plants and they do not have electricity. And the health impact is worse. Not only is it asthma, it's cardiac problems and just having a hard time breathing. Of course it affects your heart.”

The company is fighting the decision because of what it deems the unnecessary costs, but the EPA cited air-quality and health concerns on the Navajo Nation as well as adverse impacts to nearby national parks and monuments such as Mesa Verde National Park in Colorado.

Late last month it was revealed that the state of New Mexico fined PNM $125,000 (pdf) for six major air pollution violations at the San Juan plant over the course of the last year.

Thanks for a great story. It's hard to believe that so many people are living without electricity right here in the USA - working with Doug Vilsack and the Navajo people to bring solar to their reservation has been one of the most rewarding experiences of my life.
Several of us at Nokero hail from Vail, and we love reading the site and keeping up on what's REAL in the Vail Valley.
Thanks,
-Tom

Hey, you used to write wonderful, but the last few posts have been kinda boring¡K I miss your super writings. Past several posts are just a little bit out of track! come on! jaguarqq

The the very next time Someone said a blog, Hopefully so it doesnt disappoint me just as much as this blog. I mean, Yes, it was my substitute for read, but I actually thought youd have some thing fascinating to say. All I hear is usually a bunch of whining about something you could fix in case you werent too busy in search of attention. UK FAKE DRIVING LICENCE

Hey, you used to write excellent, but the last few posts have been kinda boring¡K I miss your super writings. Past few posts are just a little out of track! come on! fyp138

Youre so cool! I dont suppose Ive read anything this way just before. So nice to get somebody with many original ideas on this subject. realy i appreciate you for starting this up. this website is one thing that is needed online, someone with some originality. valuable project for bringing something new for the internet! 먹튀사이트

Absolutely outstanding information and very well written,thank you very much for this. https://ejournal.uimadura.ac.id

The the very next time Someone said a blog, I am hoping who’s doesnt disappoint me up to brussels. I am talking about, I know it was my substitute for read, but When i thought youd have something fascinating to state. All I hear is a number of whining about something that you could fix when you werent too busy searching for attention. צימרים דקה 90

Rattling wonderful info can be found on web blog . stnkslot