'This is one of the best victories of my career'

The top of the overall leader board remained unchanged from that fateful stage in Vail, when Team RadioShack's Leipheimer made up 45 seconds to reclaim the lead from fellow American Tejay Van Garderen of HTC-Highroad, who had bumped Leipheimer the day before between Gunnison and Aspen.

“This is one of the best victories of my career, taking the jersey, losing the jersey and then taking it back again …,” Leipheimer said after the claiming the win in Denver. The sixth and final stage traveled between Golden and Denver with one short but brutal climb up Lookout Mountain. 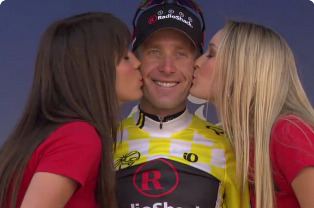 American “Fast” Freddie Rodriguez was third on the day.

In the general classification (GC), it was Leipheimer following up his Tour of Utah victory earlier in the month, followed by local squad Garmin-Cervelo's Chris Vande Velde in second (11 seconds back), Van Garderen in third (17 back), Durango's Tom Danielson (this year's top American in the Tour de France) in fourth (21 seconds back) and Tour veteran George Hincapie in fifth (53 seconds back).

This year's Tour de France winner, Cadel Evans, wound up in seventh in the Challenge (1:18 behind Leipheimer).

Vande Velde had predicted earlier in the week that the Challenge might be decided in Vail.

The overall leader board remained unchanged over the course of the next three stages from Avon to Steamboat Springs, from Steamboat to Breckenridge and then Golden into Denver.

Leipheimer, a previous Tour of California winner, said he was amazed by the size of the crowds in Colorado, with the turnout in Denver some of the “best crowds I've ever seen in the United States.” He added he definitely plans to return and defend his title next year.

“Without a doubt. You couldn't pay me to stay away,” he said. But with the Summer Olympics in London scheduled just before next year's Challenge, it remains to be seen if such a deep field will turn out.

With Evans, Andy and Frank Schleck, the Pro Cycling Challenge in Colorado marked the first time ever that the top three finishers in the Tour de France all raced in an American event.