MT. CRESTED BUTTE, Colo. – Enthusiastic crowds welcomed the field of 130 cyclists to Mt. Crested Butte for the Stage 1 finish of the USA Pro Cycling Challenge today, as Levi Leipheimer (USA) of Team RadioShack showed an impressive finish taking the stage win and claiming the lead in the general classification and sprint competitions. Known for his climbing skills and after a first place finish in this year's Tour of Switzerland and Tour of Utah, Leipheimer is a fan favorite in American cycling.

“I am very happy to get the win and get the Quiznos Leader Jersey,” said Leipheimer. “We're all proud to get this jersey and win the first stage of the USA Pro Cycling Challenge.” 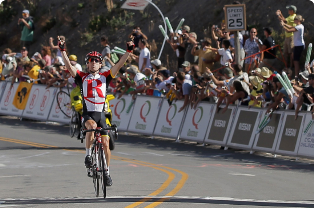 With warm weather, blue skies and a picturesque backdrop, Stage 1 of the USA Pro Cycling Challenge got underway in Salida this morning with an outpouring of support from local residents and visiting fans. After a neutral start that included two laps through the city, the race headed out of town on a 99.4-mile route to Mt. Crested Butte.

Early in the stage, Bradley White (USA) of UnitedHealthcare Pro Cycling Team, Will Dickeson (AUS) of Jelly Belly Pro Cycling Team, Jay Thomson (RSA) of Bissell Pro Cycling Team and Eduard Alexander Beltran (COL) of UNE-EPM formed a break that would stick for a good part of the race and in the first 25 miles built more than a five-minute lead.

After heading over rolling hills the route took the riders to their first climb of the race – Monarch Pass (11,315 ft.). Lined with throngs of cheering fans, some of whom had camped out to catch a glimpse of the top riders in the world, the first King of the Mountains (KOM) competition of the race was taken by Beltran. Following the KOM, Dickeson and Beltran eventually fell back, leaving White and Thomson in the lead.

“There was a bit of a headwind and I was kind of in the break,” said White. “We dropped the first two guys in the descent and we weren't sure if we should wait for them. We decided to ride and were going to see if they would come back, but they didn't.”

After a fast decent on which the riders reached speeds of 60 mph on one inch of rubber, they crossed a slightly uphill, windy valley leading into Gunnison, all while battling strong, up to 20 mph headwinds. Once in Gunnison, the location of tomorrow's start, the riders faced the first Smashburger Sprint Line, which was taken by White, at which point they took a sharp right and headed north to Crested Butte. A gradual climb, the course then wrapped around the historic town heading up a steep, but short climb to the small ski community.

With 15 km to go, the peloton caught the break and the race was on to the finish. At 5 km the riders reached the second and final Smashburger Sprint Line of the day and the points went to Elia Viviani (ITA) of Liquigas. Heading up the hill to the finish line the group saw several attacks, which eventually lead to a first place finish for Leipheimer.

“Today was a great day of racing that really gave the riders and fans a taste of what's ahead in the coming days,” said Shawn Hunter, co-chairman and CEO of the USA Pro Cycling Challenge. “The USA Pro Cycling Challenge is going to take everyone to new heights, allowing us to showcase all the state has to offer while pushing the riders to their limit.”

Leipheimer claimed the Quiznos Leader Jersey and the Smashburger Sprint Jersey. Van Garderen kept the Sheets Best Young Rider's Jersey. The Exergy Most Aggressive Jersey went to Bradley White (USA) of UnitedHealthcare Pro Cycling Team. And the Nissan King of the Mountain (KOM) Jersey was awarded to Beltran Suarez for his performance on Monarch Pass.

The Queen Stage is the crown jewel of the USA Pro Cycling Challenge. The journey from Gunnison to Aspen will be the hardest, longest and highest of the race, summiting two 12,000-ft. peaks in one day. This promises to be the toughest stage in America, and the toughest day of racing of the entire year. Starting at Main St. and Virginia St. in the authentic Western town of Gunnison, the cyclists will travel through Gunnison National Forest and then ascend 2,740 ft. over the course of 13.7 miles to reach the first King of the Mountain line of the day on top of 12,126-foot-high Cottonwood Pass, the highest point during this seven-day race. In a unique twist, the ascent up Cottonwood Pass is on a dirt road, an extra challenge for these racers' thin road tires.

After a tough climb and a fast descent comes another beautiful, but grueling climb up Independence Pass. The road is narrow and steep with a 6.5 percent gradient and numerous switchbacks. This second King of the Mountain line will certainly separate the true competitors from the peloton. At 12,095 ft., the oxygen level is only 60 percent that of what athletes inhale at sea level. After 131 miles, this take-no-prisoners stage ends in downtown Aspen on Main St. at Galena, in the shadow of the Maroon Bells, Colorado's most photographed mountain peaks.

I went over this internet site and I believe you have a lot of fantastic information, bookmarked (:. jaguarqq

I like the valuable info you provide in your articles. I’ll bookmark your blog and check again here regularly. I’m quite certain I’ll learn many new stuff right here! Good luck for the next! fyp138

What i do not realize is actually how you’re not really much more well-liked than you might be now. You’re so intelligent. You realize thus significantly relating to this subject, produced me personally consider it from so many varied angles. Its like women and men aren’t fascinated unless it’s one thing to accomplish with Lady gaga! Your own stuffs outstanding. Always maintain it up! new zealand visa application

I must show some appreciation to you for bailing me out of this scenario. Because of surfing around throughout the world wide web and coming across tricks which were not helpful, I figured my entire life was done. Being alive minus the strategies to the issues you’ve solved as a result of your good article is a critical case, and the kind that would have in a wrong way affected my entire career if I had not discovered your site. Your main know-how and kindness in touching all things was excellent. I am not sure what I would have done if I hadn’t come upon such a subject like this. I’m able to now look ahead to my future. Thanks very much for this reliable and result oriented help. I won’t be reluctant to recommend the blog to anyone who needs and wants support on this issue. 먹튀사이트

Youre so cool! I dont suppose Ive read anything like this prior to. So nice to uncover somebody with many original thoughts on this subject. realy appreciate beginning this up. this fabulous website are some things that is required on the web, an individual with some originality. valuable work for bringing something new for the net! צימרים לזוגות