RealAspen News and Community Content Feed
By Troy Hooper
Real Aspen – August 23, 2011
When the USA Pro Cycling Challenge comes whizzing into Vail on Thursday, the locals and visitors gathered here and along the scenic course can experience the race up close and personal.

“The high level of interaction with fans in Colorado will be similar as in France,” said Colorado cyclist Tom Danielson, noting that fans will be able to “talk to racers, touch them, breathe the same air they're breathing. ... Everyone here in the U.S. will experience it just like they do in France.” 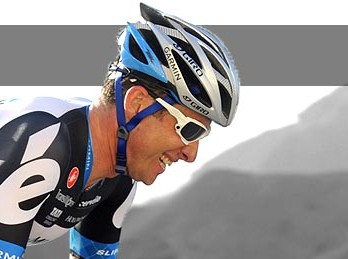 More than 50,000 spectators lined the 5.2-mile route from Garden of the Gods to Colorado Springs on Monday, as the race got under way. German cyclist Patrick Gretsch of HTC-Highroad bested a world-class field containing the 2011 Tour de France podium finishers and five World Champions to claim victory on a fast, mainly downhill course lined shoulder-to-shoulder with enthusiastic fans.

Race officials said Gretsch completed one of the fastest time trials ever in a major professional cycling race on American soil, covering the 5.2-mile course in 8 minutes and 27 seconds. He donned the yellow Quiznos Leader Jersey when Stage 1, from Salida to Mt. Crested Butte, got under way today.

Today's 99.3-mile ride will be followed by tomorrow's 130-mile journey from Gunnison to Aspen, which has been dubbed the Queen Stage of the race. It includes climbs up and down Cottonwood Pass and then Independence Pass — both formidable challenges with elevations that top 12,000 feet.

Danielson, a Boulder resident who went to school at Fort Lewis in Durango, can't wait. 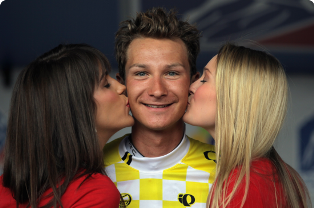 In a conference call with Real Aspen and other media earlier this month, Danielson said when he first heard about this race, “the hairs on the back of my neck immediately went up and I got so excited.”

"I've always dreamed of doing a hometown race like this," Danielson said. "When I have a chance to do local races in my home state, on my home roads and on the terrain that I'm sort of built for, high altitudes and climbing, I just love it."

Because of his familiarity with Colorado's high country, many observers are picking Danielson to shine. He said he absolutely welcomes the challenge of being a frontrunner in the 510-mile race.

“I'm fired up,” said Danielson, the top American finisher in last month's Tour de France, placing ninth overall. “'I hope I can put that weight on my shoulders and perform well in my home state.”

Many racers have said that the Gunnison-to-Aspen stage could be pivotal.

“Going all the way to Independence Pass — that climb is hard and it's long,” said Danielson, who rode the pass a few weeks ago in preparation for tomorrow. “Here I am in Tour de France condition and on Independence Pass and I'm feeling lightheaded and suffering a little bit. … The last four miles of it are very, very difficult. … There's really no place to hide and you're at 12,000 feet.”

Illinois resident Christian Vande Velde, who rode with Danielson at the Tour de France, pointed to the time trial in Vail on Thursday as another point on the course where the race could be decided.

“The time trial will be a huge factor,” Vande Velde said. “I'm hoping for a close race coming into the time trial in Vail and think that'll be one of the determining factors.”

But, really, every stage of the competition counts, they said.

And while the race will be grueling for riders, it will be plush for spectators.

Unlike the Tour de France where fans have to camp out and hike to viewpoints along some sections of the course, the USA Pro Challenge should prove relatively easy to navigate, according to racers.

“Here in Colorado, cycling fans will get top-notch hotels, top-notch dining and the roads to access the route will be really easy and really simple,” Danielson said.

25 Comments on "Vande Velde: Vail time trial could be 'one of determining factors' in USA Pro Cycling Challenge overall outcome"

As the main competition of the week for Stage 5, the Vail time trial will feature some of the world's best riders going all out over a moderately challenging course. Riders are expected to complete it in just over 22 minutes, with the fastest rider in that race being named the overall Vail time trial champion, and providing resume writing services reviews at cheap rates for individuals help. And while it's far from a sure thing, today's results could be one of determining factors in who takes home the yellow jersey at the end of the race.

Glad to find these domains of public torrent. They have shared the enough ideas and information about this with us. I am highly obliged to them for sharing this great piece of information in such an effective way.https://www.techdee.com/best-essay-writing-service-review/

skyworld live
is a live streaming of a fantasy world that players can roleplay in with their friends.

Remarkable article, it is particularly useful! I quietly began in this, and I'm becoming more acquainted with it better! Delights, keep doing more and extra impressive! https://rowanqlfys.mdkblog.com/19007574/benefits-of-hiring-a-php-development-agency

very interesting post.this is my first time visit here.i found so mmany interesting stuff in your blog especially its discussion..thanks for the post! Canada Visa From Israel

You understand your projects stand out of the crowd. There is something unique about them. It seems to me all of them are brilliant. Solicitud de visa de Turquía en línea

This is my first time visit to your blog and I am very interested in the articles that you serve. Provide enough knowledge for me. Thank you for sharing useful and don't forget, keep sharing useful info: Applikazzjoni Online għall-Viża tal-Istati Uniti

Hey what a brilliant post I have come across and believe me I have been searching out for this similar kind of post for past a week and hardly came across this. Thank you very much and will look for more postings from you. கனடா விசா தகுதி

i was just browsing along and came upon your blog. just wanted to say good blog and this article really helped me. daftar slot69

I think this is an informative post and it is very beneficial and knowledgeable. Therefore, I would like to thank you for the endeavors that you have made in writing this article. All the content is absolutely well-researched. Thanks... 土耳其签证要求

I got too much interesting stuff on your blog. I guess I am not the only one having all the enjoyment here! Keep up the good work. АМЕРИКА БИЗНЕС ВИЗА

This is very interesting content! I have thoroughly enjoyed reading your points and have come to the conclusion that you are right about many of them. You are great. Applicazione in linea di visa di i Stati Uniti

I was looking at some of your posts on this website and I conceive this web site is really instructive! Keep putting up.. Piping stress engineer

There are particular dissertation websites that are online via the internet once you reach evidently published as part of your world wide web page. Turkey Visa for Schengen Resident

I’m going to read this. I’ll be sure to come back. thanks for sharing. and also This article gives the light in which we can observe the reality. this is very nice one and gives indepth information. thanks for this nice article... Toko Packaging Plastik Denpasar

Thanks for the blog post buddy! Keep them coming... 미국 비자 온라인 신청