The former vice president dropped in on an Aspen Institute media forum titled “Networks and Citizenship” on Thursday and railed against corporate evildoers who put profit above society.

Gore referenced the book “Merchants of Doubt: How a Handful of Scientists Obscured the Truth on Issues from Tobacco Smoke to Global Warming” by Naomi Oreskes and Erik M. Conway, which tells of how petroleum, steel, autos, utilities and others enlisted lobbyists to cloud the climate debate.

Gore recalled how not long ago tobacco giants “succeeded in delaying the implementation of the surgeon general's report for 40 years – 40 years! In every one of those 40 years the average number of Americans killed by cigarettes each year exceeded the total number of Americans killed in all of World War II: 450,000 per year. My sister was one of them. … It was evil, evil, evil.”

The model of media manipulation used then, Gore said, “was transported whole cloth into the climate debate. And some of the exact same people — I can go down a list of their names — are involved in this. And so what do they do? They pay pseudo-scientists to pretend to be scientists to put out the message: ‘This climate thing, it's nonsense. Man-made CO2 doesn't trap heat. It may be volcanoes.' Bullshit! ‘It may be sun spots.' Bullshit! ‘It's not getting warmer.' Bullshit!” Gore exclaimed. 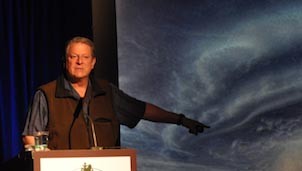 “When you go and talk to any audience about climate, you hear them washing back at you the same crap over and over and over again,” he continued. “There's no longer a shared reality on an issue like climate even though the very existence of our civilization is threatened. People have no idea! … It's no longer acceptable in mixed company, meaning bipartisan company, to use the goddamn word climate. It is not acceptable. They have polluted it to the point where we cannot possibly come to an agreement on it.”

During the debt-ceiling debate, American Crossroads, Americans for Prosperity and a collection of smaller groups followed tobacco's blueprint for bombarding the media with its messages, he said.

“Unnoticed in Washington and New York as the debt-ceiling debate was going on, the ratio of television advertisements was nine to one on the ‘Don't-lift-the-debt-ceiling debate. Spending is the problem.' And now we're going to tip the country back into recession. It's absolutely insane,” Gore said.

“Mark my words on this: we became the greatest country on earth because we made better decisions than any other nation,” he continued. “And we made better decisions because we used shared consciousness, shared reality, rule of reason, best evidence, democratic discourse, free debate to figure out what's more likely than not to be the best decision here. It didn't always work, but it worked a hell of a lot better. Since we adopted this new system we are making catastrophic decisions that have massive consequences. The Iraq invasion. What just happened with macro-economic policy. It really is extremely difficult.”