“The new commission lacks a member who is intimately aware of Western Slope community impacts,” said Frank Smith of Western Colorado Congress. “We're cautiously optimistic but concerned about the ability of the new COGCC to protect public health and Colorado air and water.”

“The new COGCC will have tough decisions to make, and some of these will highlight their allegiances and values,” Smith added. “COGCC will make big decisions related to drilling in and near communities and updating fracking [hydraulic fracturing] regulations. The poor economy led the previous COGCC to expedite drilling and, some may say, place less of an emphasis on understanding natural gas's impacts to public health.”

But Hickenlooper, a Democrat and former petroleum geologist, said in a release late last week that he feels the new commission has a diverse makeup.

“Different voices and a united spirit of collaboration are key to the success of the commission,” he said. “We are confident this group will help serve the industry, land owners and the environment well as it navigates through issues that are important to both the state's economy and protection of Colorado's beautiful landscapes.”

On Tuesday Hickenlooper announced that he wants the COGCC to adopt a new hydraulic fracturing rule by the end of the year, compelling industry to publicly disclose the chemicals used in the controversial process, which injects water, sand and undisclosed chemicals into natural gas wells to fracture geological formations and free up more gas.

But Leslie Robinson of the Grand Valley Citizens Alliance said that, fracking issues aside, the previous COGCC never dealt with setbacks, a critical topic given the increasing number of gas wells being drilled near residential development. 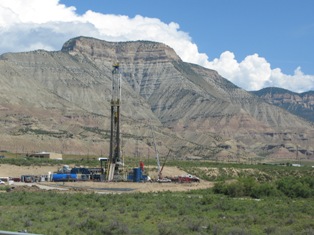 A gas rig near the entrance to Battlement Mesa.
David O. Williams
“One detail left unfinished by the previous commission is the rule about setbacks from a drill pad from homes, schools and businesses,” Robinson said. “Currently, there is only a 150-foot limit from a residence — in case the 100-foot rig falls — and 350-feet minimal limit in residential areas where a drill pad and following fracking operation can be placed.”

That simply won't cut it, argues Robinson, who has been working hard with residents of the Battlement Mesa retirement community, which is facing up to 200 new wells proposed by Denver-based Antero Resources.

“With this new commission's make-up, it's a wasted effort hoping that a new [setback] rule to protect citizens might be considered,” Robinson said. “In fact, these next years, environmental and citizen groups like the Grand Valley Citizens Alliance will probably have to devote our resources to protect the current rules from being dismantled.”

The new appointments are for four years and replace commission members whose terms expired July 1. Hickenlooper's appointments still must be approved by the Colorado Senate.

Hickenlooper immediately found himself on the defensive for other reasons when the new appointments were announced on Friday. A Grand Junction television station aired a report questioning a campaign contribution of $1,100 to Hickenlooper made by Pearce in June. The donation raised “pay to play” questions.

“I've donated to Hickenlooper before, even other candidates in the past,” Pearce told KJCT-TV. “There are probably hundreds of thousands of people in the state of Colorado who contributed to the governor who didn't get this kind of appointment.”

Hickenlooper denied any knowledge of the contribution and said he would still support Pearce: “If we paid attention to that, I would've taken him off of the list just to remove even the appearance of impropriety. You guys have to put up with people saying ‘Oh, he paid to play.' All I can assure you is that nothing could be further from the truth.”