From Perry to Obama, fickle political winds blowing in Aspen these days

Sometimes the same can be said of its politics.

In Aspen, the partisan winds have been blowing from right to left recently.

One moment Texas Gov. Rick Perry is stumping in front of a room full of Republican fat cats for a potential presidential bid. The next thing you know first lady Michelle Obama is kicking off her shoes and wiggling her toes in Aspen Skiing Co. Managing Partner Jim Crown's lawn, raising money for her husband's 2012 campaign.

Gov. Martinez pointed to a 4.9 percent unemployment rate in southeastern New Mexico — a section of the state where record revenues are coming in from drilling on previously off-limits tracts of land.

The governor praised the lifting of regulations as a catalyst for an improved business atmosphere, adding that the previous administration's bureaucracy had bogged down the drilling industry there with “unspeakable” rules.

“Now our energy-rich state is more predictable,” she said, adding that New Mexico's overall unemployment rate has dropped from 8.6 percent when she took office in January to 6.8 percent today. 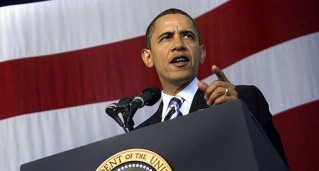 What she didn't say is that the region is also home to the threatened dunes sagebrush lizard, which is losing habitat fast. Environmentalists blame oil and gas drilling for the lizards' dire outlook. Lizards aren't the only creatures who can thrive in southeastern New Mexico. The area is rife with reptiles and mammals like jack rabbits and bats, the latter of which are disappearing amid a prolonged drought.

It isn't every day that you'll find hundreds of folks in Aspen cheering oil drilling.

But these are dark and strange times in America. The rich are getting richer, the poor are getting poorer, and the Republican Governors Association is holding its executive roundtables in historically left-leaning Aspen.

Normalcy returned to Aspen's liberal landscape Tuesday when the first lady spent about 90 minutes here, adding to President Barack Obama's war chest thanks to the well-heeled attendees at a private function at the Crown home. Most of the invitees paid between $1,000 and $10,000 for a chance to hear the first lady speak and have their mugs photographed with hers for framing and Facebook.

According to those who attended, the first lady lauded the May elimination of Osama bin Laden and stressed how the Obama administration inherited a broken economy that it is working hard to fix.

Of course, she also asked for more money.

Weather and politics may be fickle but some things never change.

0 Comments on "From Perry to Obama, fickle political winds blowing in Aspen these days"