“One of the things we always look at is the economic impact of hunting and fishing to the state economy,” said Gaspar Perricone, co-founder and co-director of the Denver-based Bull Moose Sportsmen's Alliance. “In Montana, wildlife-related activity generates $1.1 billion annually, and of that, $759 million comes specifically from hunting and angling.

“Any time there's a threat to the habitat, you obviously run the risk of impairing some of the tourism to a place like Yellowstone as well as the opportunity for quality hunting and fishing.”

Friday's pipeline break, which the company now admits spilled more than 1,000 barrels of oil (or at least 42,000 gallons) is more than 100 miles downstream from Yellowstone National Park. But the river near the town of Laurel, where the rupture occurred, is known for world-class fishing. 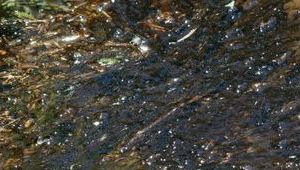 Wildlife officials told MSNBC they don't expect to see short-term impacts such as dead fish floating on the surface, but they are worried about long-term effects on small forms of aquatic life that fish eat. That would adversely impact the fish habitat on the nation's longest undammed river.

As of Wednesday, more than 440 people were working to soak up the oil, according to a press release from Region 8 of the U.S. Environmental Protection Agency (EPA), which includes Colorado, Montana, North Dakota, South Dakota, Utah, and Wyoming.

“[Wednesday] EPA issued an order to ExxonMobil, pursuant to the Clean Water Act, directing the company to take a number of clean-up and restoration activities as a result of an oil spill into the Yellowstone River,” the release reads. “EPA will continue in its role in directing and overseeing the cleanup and restoration of the river and ensuring the protection of human health and the environment.

“EPA is coordinating its response actions with the Department of the Interior, Fish and Wildlife Service and state and local agencies and will take whatever steps are necessary to ensure ExxonMobil, as the responsible party, addresses any and all potential impacts of this spill.”

Environmental groups have already begun questioning Exxon's estimates of the size and scope of the spill.

Alexis Bonogofsky, whose family farm is in Laurel, told CNN oil has polluted the edge of her farmland to the point that she can't let her animals graze. “You go down to where the oil is,” she said, “and you don't hear anything anymore. No birds, no toads, no crickets, nothing. It's just silent.”

Bonogofsky is the daughter of Debra Bonogofsky, a moderate Republican businesswoman who last year told the Colorado Independent she was the victim of a “smear campaign” orchestrated by Western Tradition Partnership – a pro-oil-and-gas political advocacy group originally registered in Colorado.

Bonogofsky filed a formal complaint against the group with the Montana Commissioner of Political Practices, who determined WTP violated Montana campaign finance and disclosure laws in a 2008 legislative race. WTP, now American Tradition Partnership, describes itself as a “no-compromise grassroots organization dedicated to fighting the radical environmentalist agenda.”

While Colorado in recent years has not seen a high-profile spill along the lines of the Montana pipeline break or recent ruptures in Michigan and Illinois, Perricone's Bull Moose group in May released a report detailing more than 1,000 small spills of more than 5.6 million gallons of oil, wastewater and other drilling fluids in three western Colorado counties over the past decade.

“If we develop our natural resources in an appropriate manner, then wildlife-related activity is a well than can be tapped in perpetuity,” Perricone said. “However, if we get to the point where the extraction of our natural resources damages wildlife and wildlife habitat to the degree that it can't recover, then that certainly is not a place that we'd like to find ourselves.”