RealAspen News and Community Content Feed
By Allen Best
Real Aspen – July 3, 2011
Completing their dig at Snowmass Village, scientists from the Denver Museum of Nature and Science and other institutions now wonder if an ancient earthquake that created quick sand explains the unusual number of bones from juvenile mastodons.

“What is so curious about this site is that we are regularly finding parts of small animals,” said Johnson, a paleontologist and chief curator of the Denver Museum of Nature and Science, in an interview with Mountain Town News this week.

In the lower levels of the ancient lakebed, most of the bones are of mastodons, a creature somewhat like the elephants of today. 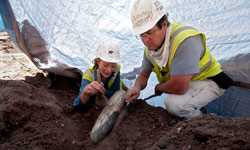 Museum intern Kaitlin Stanley and Dr. Kirk Johnson clean a mastodon tusk under a tent in Snowmass to protect it from sunlight.

Scientists believe the remains of fossils, trees, leaves, and insects were deposited more than 40,000 to 50,000 years ago, as radiocarbon dating has proven useless. The technique is useful only on more recent remains. But they think the lakebed can be no older than 150,000 years. That's when a massive glacier shoved bits of soil and rock into a mounded ridge, called a terminal moraine, on which the lakebed was then formed.

Johnson said the scientists don't yet have the evidence to support this hypothesis. One piece of evidence will come from study of the mastodon tusks. Like trees, they display growth cycles, revealing even the season of the year when the animal died. If the tusks reveal identical seasons for many of the tusks, they likely had a common killer.

Study of sediments will also reveal whether an earthquake caused creation of quick sand.

The working hypothesis, Johnson said, is that a herd of mastodons was crossing the lake when an earthquake struck.

Positive site, where did u come up with the information on this posting?I have read a few of the articles on your website now, and I really like your style. Thanks a million and please keep up the effective work. Server Infrastructure Certified Information Systems Auditor (CISA) Cisco Certified Networking Professional (CCNP) Routing and Switching Citrix Certified Associate

If you are looking for more information about flat rate locksmith Las Vegas check that right away. click here

Thanks for a wonderful share. Your article has proved your hard work and experience you have got in this field. Brilliant .i love it reading. imr 7828ssc

I have read all the comments and suggestions posted by the visitors for this article are very fine,We will wait for your next article so only.Thanks! click here

I can see that you are an expert at your field! I am launching a website soon, and your information will be very useful for me.. Thanks for all your help and wishing you all the success in your business. viaggi

Super site! I am Loving it!! Will return once more, Im taking your food additionally, Thanks. 토토