Sunday's New York Times piece quoted industry insiders and state and federal regulators questioning how financially solid the current shale gas boom is, especially in light of data showing wells are playing out much more quickly than anticipated. Credible sources are warning various plays around the country are possibly being oversold to investors.

“Today's revelations should raise more serious questions about the economics behind the shale gas rush,” said Hinchey, whose New York district is in the Marcellus Shale formation. “We already knew shale gas drillers were misleading the public about hydro-fracking's environmental risks. Now we are learning that these companies may be cooking the books and using Enron-like tactics to paint a rosy and unrealistic picture for investors, policymakers and local communities. 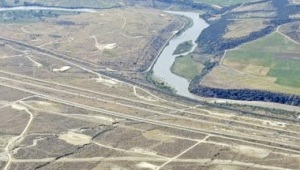 “This should be a wakeup call for everyone concerned about our energy future and a spark for the SEC to investigate whether shale gas investors and the public have been intentionally misled.”

Hinchey, DeGette and Polis introduced the Fracturing Responsibility and Awareness of Chemicals (FRAC) Act to require the national disclosure of chemicals used in the hydraulic fracturing, or fracking, process. The bill would remove a Safe Drinking Water Act exemption for the process that was granted by Congress, with the backing of the Bush administration, in the Energy Policy Act of 2005.

House Minority Leader Nancy Pelosi, D-Calif., recently told the Colorado Independent that the industry should welcome the disclosure of fracking chemicals – they currently resist for proprietary reasons – as a means of protection from future litigation.

And environmental shareholder advocacy groups have been forcing votes on fracking chemical disclosure at companies like Exxon and Chevron that have garnered increasing support among all shareholders.

As the Times story points out, the controversy over fracking and its potential to contaminate groundwater has become part of the economic uncertainty looming over the current gas boom

“There are implications for the environment, too,” the Times wrote. “The technology used to get gas flowing out of the ground — called hydraulic fracturing, or hydrofracking — can require over a million gallons of water per well, and some of that water must be disposed of because it becomes contaminated by the process. If shale gas wells fade faster than expected, energy companies will have to drill more wells or hydrofrack them more often, resulting in more toxic waste.”

ProPublica today posted a story saying SEC rule changes in 2008 made it easier for oil and gas companies to inflate natural gas reserves.

The way of presenting the details related to the topic looks pretty good. I would like to appreciate the way you have managed to tell the whole details in a quite impressive way. Keep up the good work folks. CBD Oil Florida